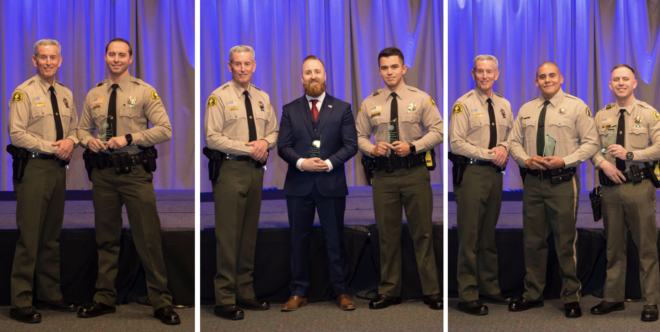 “Next to creating a life the finest thing a man can do is save one.” -Abraham Lincoln

The awards are to honor deputies who jumped into action and helped save someone’s life.

On December 6, 2018, a man called 911 and requested a welfare check on his girlfriend when she did not show up for school.

Deputy Danny Pulido went to the girlfriend’s home and found the front door ajar. When Pulido went inside, he found a handwritten note saying she intended to kill herself. During the deputies search for her they also learned she had sent text messages to friends indicating she intended to commit suicide. Pulido initiated a critical missing investigation and enlisted the help of Deputy Jacob Graham.

The deputies obtained her cell number from her boyfriend and initiated emergency GPS tracking of her phone. The GPS information provided a general location of her last known whereabouts. Graham and Pulido conducted an extensive area check and eventually found her car. She was inside and in an extremely altered state.

The deputies called for medical aid and forced their way into her car. Deputies found a half empty bottle of sleeping pills and hand sanitizer. Her breath smelled like hand sanitizer and there was a white residue around her mouth. Paramedics arrived and transported her to the hospital.

The woman, a United States Army veteran, ultimately survived the ordeal and was later released from the hospital.

On May 29, 2019, Victorville patrol deputies responded to a call for a man who had been shot and was lying in a field in the downtown area. Deputy Cory McCarthy, was in the area for an unrelated investigation and heard the call over the radio. He found the man shot in the chest and laying on the ground. McCarthy used his tactical medicine training and experience to evaluate the man’s condition: he had shallow breathing and a faint pulse. McCarthy determined he possibly had a collapsed lung and needed a chest seal applied to his wound so he would be able to breathe more effectively. McCarthy applied a chest seal and the man immediately began breathing easier.

McCarthy monitored his condition for approximately 10 minutes until AMR and Victorville firefighters arrived. The man was airlifted to the hospital and survived.

One of the firefighters who responded to the call said the man could have died if McCarthy had not rendered medical aid so swiftly.

McCarthy is assigned to SED and responding to calls-for-service is not one of his current job responsibilities. However, McCarthy paused his unrelated investigation and responded to the scene of the shooting. He utilized his training and experience to save the man’s life.

Garcia and Aria immediately started performing CPR. After several minutes of CPR, the woman regained a pulse and started breathing. The fire department arrived several minutes later and continued life saving measures. The woman was transported to the hospital for further medical treatment. Garcia and Aria’s quick and effective actions saved her life.