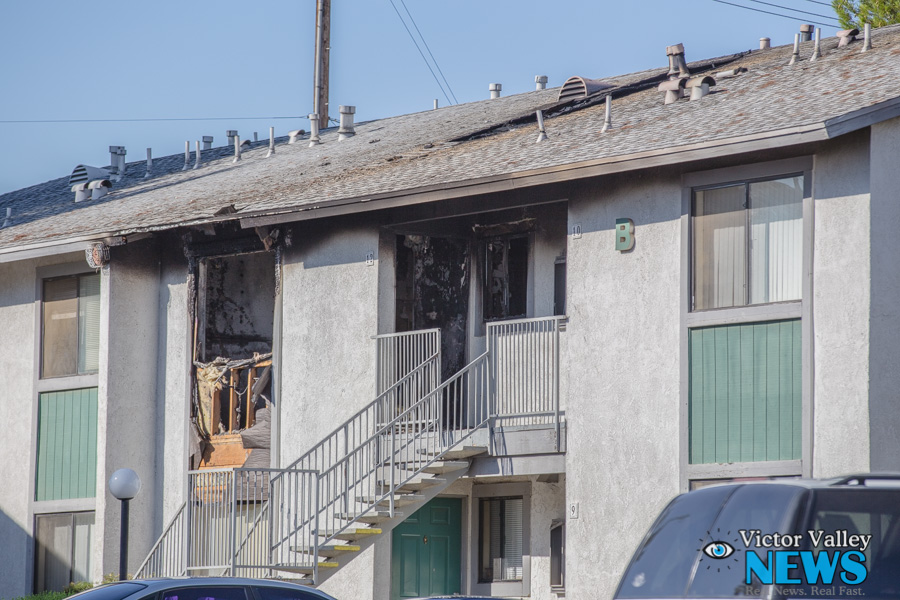 Just before 1:00 a.m. on Saturday, August 27th firefighters responded to the North Port Apartments on the 14000 block of Rodeo Drive reference multiple reports of a fire.

Upon arrival, firefighters located an upstairs apartment with flames coming out of the windows.

San Bernardino County Fire Captain Jason Serrano said, all occupants of the entire structure had been evacuated by Sheriff’s deputies prior to the fire departments arrival.

“Our priority is to rescue anyone that is in any potential danger,” stated Cpt. Serrano.

Using an aerial ladder the truck crew cut a hole in the roof and allowed the heat to ventilate, a common practice known by firefighters as “vertical ventilation.”

A total of 31 firefighters responded, including five paramedic engine companies, three paramedic trucks, and they were assisted by one engine from Apple Valley Fire District.

Firefighters managed to knock down the fire in approximately 25 minutes.

The 2nd alarm commercial structure fire was contained to one unit and did not spread laterally into adjacent units, stated Serrano.

According to Public Information Officer Jeff Allen, reports were received that a person was seen jumping from an upstairs window.

The occupant of the apartment suffered minor injuries and was transported to a local hospital. Her injuries are nothing serious, stated Allen.

As a result of the fire, multiple people were displaced and will seek assistance from the American Red Cross or stay with family members.