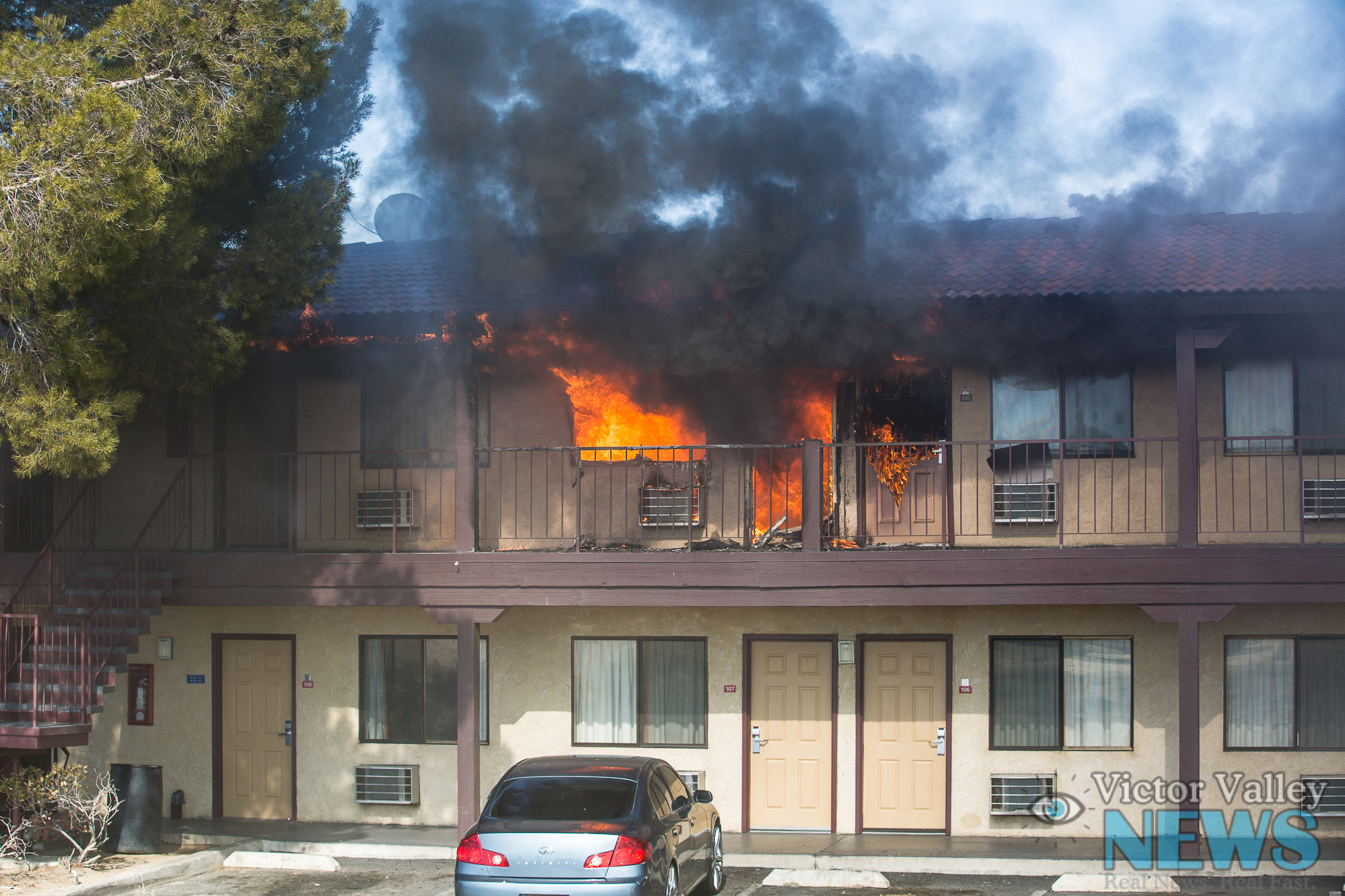 Aftermath of the Motel fire at the Roadway Inn in Victorville. (submitted photo)

At about 11:15 AM, firefighters responded to the Roadway Inn Motel located at 15366 La Paz Drive in Victorville and while en route they could see a large column of smoke. According to Fire Captain Mike O’Bier, firefighters arrived within 4 minutes of the report and found a 2-story center motel unit burning.

“It was fully involved with flames shooting out the window. Units went into attack mode and began knocking down the fire. The truck company went to the roof and began ventilation operations to try to confine the fire to the units of origin. It had already spread to a second unit which was also quickly knocked down.”

Amongst the resources used to fight the 2nd alarm fire were a total of 35 firefighters, 8 fire engines, 1 truck company, 3 battalion chiefs and numerous deputies from the San Bernardino Sheriff’s Department. Along, with 1 engine from the Apple Valley Protection District with 1 engine.

“People started running out of the building. The entire front end was engulfed in flames. People were running from the top floors for safety. It was just insane, stated witness Lupe Jaramillo.

The fire is suspected to have started in room #207 while the room was unoccupied. According to information provided exclusively to Victor Valley News, the displaced tenant who was temporarily staying in the room believes a “cheap” hoover-board that was left charging in the room is the cause of the fire.

O’Bier told Victor Valley News at this time the official cause of the fire remains under investigation.”All investigations go through a methodical process of ruling out the possibilities. Till’ that process is complete all possible causes are considered.”

The Red Cross responded to assist with housing for tenants that were displaced due to the motel fire. No firefighters or civilians were injured during the fire.

A single mother of five is among those displaced by this fire. Her friend Gina Mahfouz told Victor Valley News that she lost everything including money and her children’s clothing. The family can use assistance with girls size 8 clothing and size 1 and 2 girls shoes. They also are in need of boys size 5 clothing and size 11 shoes. Anyone that is able to help can call Gina at (909)961-5565 to arrange getting these things to the family.