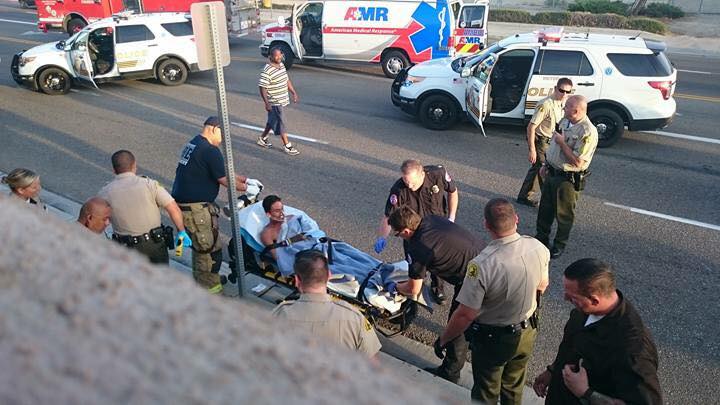 VICTORVILLE-(VVNG.com): Many residents were shocked when they witnessed a confused “naked bloody man” aimlessly roaming around a busy victorville street on Monday, September 28, 2015. The incident took place just feet from a school bus stop near El Evado and Seneca Roads.

Some, including children, were terrorized as the man with now confirmed drug and mental problems walked through the streets grabbing door handles and according to witnesses, even chasing children.

The man, now identified as 19-year-old Daniel Anglin was charged on Thursday with seven charges including six felonies and one misdemeanor. Anglin’s mother and sister have pleaded to the public to understand that he is mentally ill and has been off of his medication. On a recent CBS 2 television interview, Anglin’s mother confirmed he is suffering from schizophrenia and bipolar disorder, but she did also confirm drug use was also something Anglin currently battles.

Among the charges Anglin faces, are five for attempted carjacking, a count of burglary and also a misdemeanor indecent exposure charge. It is believed the blood on Anglin comes from the break in at a nearby apartment when breaking a window. According, to the Sheriff’s press release Anglin attempted to steal a patrol unit causing force by one of the officers that few, including Anglin’s sister felt was excessive.

Arrest records indicated that Anglin was never booked into jail, although the Sheriff’s press release says he was transported for medical treatment and booked. At this time, according to court records, there is no court date set for Anglin.