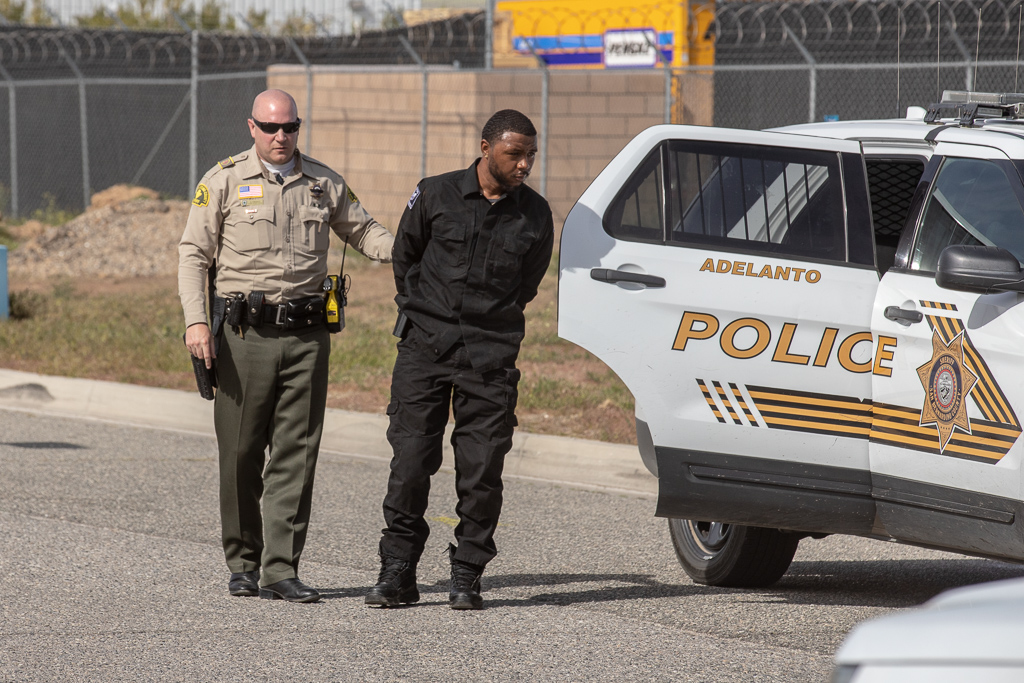 ADELANTO, CALIF. (VVNG.com) — Deputies are investigating a road rage incident with reports of shots fired at a vehicle, which led to the arrest of a security guard Sunday afternoon.

Deputies responded to the area of Chamberlain and Highway 395 at about 3:30 p.m. where the original road rage incident was reported.

“Deputies arrived and were following the victim’s vehicle as he was telling dispatch his direction of travel,” stated Sgt. Rodriguez from the Victor Valley Sheriff’s Station.

The deputies eventually caught up to the victim who gave deputies the description of the suspect’s car and the driver.

Moments later, deputies found the suspect’s vehicle entering a warehouse facility in Adelanto on the 9920 block of Rancho Road.

“Another deputy who was in the area doing an area check for the vehicle started checking this Industrial Park, came across the vehicle that matched the description and once he saw the vehicle, he entered the business, [and] contacted two subjects with similar descriptions to what the victim told us, and they were detained and taken into custody.”

Both people detained were wearing uniform shirts  for a security company.

Deputies conducted an investigation in the parking lot of the facility and gathered evidence from the suspect’s vehicle before it was towed away.

“Only the suspect is related to this business here,” stated Rodriguez. “Two suspects were detained here. Through identification from the victims only one of them was identified as being involved in the shooting, and the second person was released.”

According Sgt. Rodriguez, the victim’s vehicle sustained a gunshot hole to the passenger side of the vehicle, but no other injuries were reported.

Deputies were in the process of trying to locate fired cartridge casings at the scene.