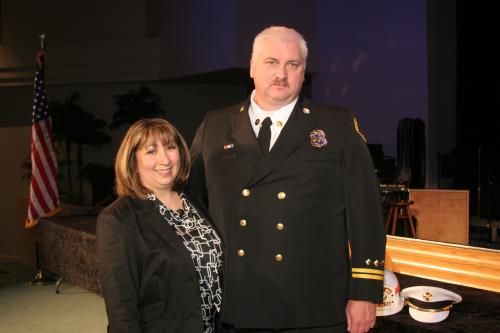 According to the San Bernardino County fire department, firefighters responded to over 23,000 emergency calls in the north desert division this past fiscal year. Division Chief Wells began his emergency services career in 1983 in the U.S. Army serving as a rescue climber and combat medic. He was later honorably discharged from the military and moved to Southern California to begin his civilian training for a career in fire service.

Over the last nine years, Walls has worked assignments in every Division in the County as a County Fire Battalion Chief. He has been responsible for the Critical Incident Stress Management/Peer Support/Chaplain team for the Department, functioned as the Operations Chief for the San Bernardino Regional Emergency Training Center (Aircraft Rescue Firefighting School), and has served as the HIPAA compliance Privacy Officer for the Department. He also has extensive background and training in trauma care and enhanced threat scenarios including 28 years of experience as a paramedic.

Walls has been a part of many large scale incidents including the Old Fire, Slide Fire, the “38 Incident” (MCI Bus Crash), the Dorner Incident, and most recently was deployed as a part of County Fire’s Type 3 Incident Management team to the Dec. 2 terrorist attack in San Bernardino. Division Chief Walls currently serves on a Type 1 Incident Management Team which provides command and control for large-scale events such as major wildfires and mass casualty incidents.

He has managed several large projects including the transition and annexation of Crest Forest Fire into the County Fire Department and deployment of the Mountain Community Emergency Response Team (CERT).

“I am excited to be returning to the North Desert Division.  I am confident that my previous experience with the Hesperia Fire Department and recent experience with the LAFCO annexation process will be beneficial to the ongoing work in Hesperia and the continued premiere service provided by the Division,” Walls said.

Chief Walls holds two Bachelor’s Degrees in Business and a Master’s Degree in Leadership and Management from the University of La Verne.

In his off-duty time, he enjoys traveling with his wife Patti, recreational shooting and teaching the use of Firearms to civilians and Law Enforcement Officers.