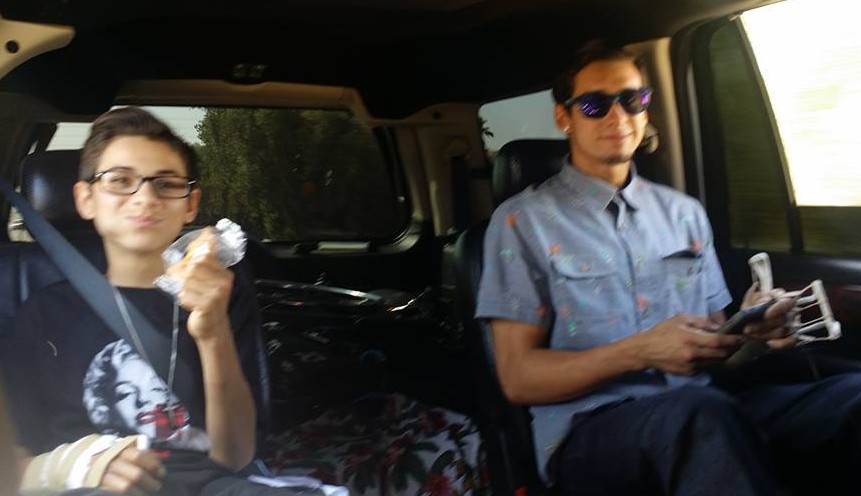 Captain John Flesher was able to meet accident victim David Castaneda Jr. David was involved a very tragic accident on Highway 138 in June of this year and sustained severe injuries.(photo:Lisa Magnifico via VVNG)

(VVNG.com)- Firefighters risk their lives running toward dangers to save the lives and property of the people they serve. Sure, some say it is their job, but it is a job only a dedicated hero would choose. Captain John Flesher and Firefighter Carlos Estrella, with the San Bernardino fire department, are no exception.

On June 24th, at approximately 11:45 p.m., an accident occurred near Highway 138 and the 15 freeway taking the lives of two Phelan teens. John Cabrera, 16 and Nicole Lyle, 18 tragically lost their lives after a freshly loaded cement truck, weighing approximately 80,000 pounds crashed into, then landed on top of the PT Cruiser, being driven by Lyle.

Three teens survived the devastating accident and are still recovering. The three survivors are not only recovering from the physical wounds, but also the emotional ones of losing two close friends and those that come with being involved in the traumatic accident. “Dave is having a hard time, his best friend isn’t here to do things with. He hasn’t had a chance to mourn his best friend because he is dealing with what he’s got going on,” said Lisa, David’s mother. All the surviving teens were rescued with injuries, but those of David Casteneda, being the most severe and those with the longest road to recovery.

When firefighters arrived on the scene they arrived to what they described as an “extremely unstable” dump truck on top of the crushed vehicle. The instability of the dump truck made the extrication both complicated and dangerous. The (HERT) Hospital Emergency Response Team was called to assist at the scene of the accident. Once the first two surviving individuals were rescued, they noticed Casteneda, who they originally did not see. 15-year-old Casteneda was still trapped in the tiny approximate 3 foot wide space the teens were all crammed into.

The rescue team, after deep discussion, decided that the best choice to save the last remaining survivor was to have trauma staff do an on-scene amputation of both legs. According to firefighter accounts, as the trauma team was preparing equipment needed to start the amputation, Captain Flesher asked if he and another rescuer could crawl under the dump truck to make one last attempt to rescue the victim. Casteneda’s condition was rapidly declining. Captain Flesher and Firefighter Carlos Estrella disregarded the high risk they were placing themselves into by attempting to rescue the trapped teen victim. It took approximately 45 minutes to free Casteneda from the vehicle. The two heroic rescuers were determined to rescue Casteneda even if it meant putting themselves in danger, to save this young man.

All three survivors were transported to Arrowhead Regional Medical Center in Colton. Shane Gretzner was treated for broken ribs and was released the following morning. Mikey Baker, suffered from a broken arm as well as nerve damage, and the treatment of a minor external head injury. Shane was released on July 2nd. David Casteneda was the last to be released from Arrowhead Regional Medical Center and is currently receiving inpatient care at Ballard Rehabilitation Center in San Bernardino. “We are not sure yet when he gets to return home, he goes back to the orthopedic doctor tomorrow to see if he can learn to stand on his left leg. He is still unable to stand on his right leg or use his left arm,” said David’s mom, Lisa Magnifico.

On July 23rd, David Casteneda and mother, Lisa Magnifico had the opportunity to meet 29-year veteran, Captain John Flesher who paid a visit to Casteneda. “He’s our angel and hero,” said Lisa Magnifico. Captain Flesher, the rescuer who asked to attempt to save David one last time avoiding the amputation of both legs, to Casteneda’s family will forever be considered family.