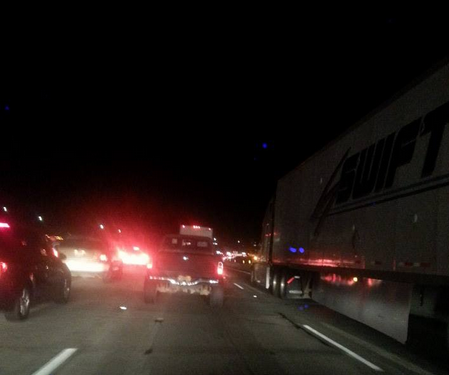 (VVNG.com)- On Saturday, October 25th, 2014 at approximately 10:01 p.m., 21-year-old Armando Barragan from Buena Park was driving his 2008 GMC Sierra north on the 15 freeway North just south of State Route 138 at an undetermined speed. Kimberly Cannon-Willey, 29 of Victorville was driving a 1998 Saturn was also driving north just ahead of the GMC SIerra at a slower rate of speed.

Barragan was also transported to Desert Valley Hospital for treatment  of minor injuries.  Barragan was arrested for hit and run and suspicion of Driving under the influence and causing injury/death. He is now at West Valley Detention Center in Rancho Cucamonga being held on $250,000 bail. He is due in court on Tuesday, October 28th at San Bernardino Superior Court for an arraignment hearing.

Identity of the minors are being withheld, the collision is still under investigation.