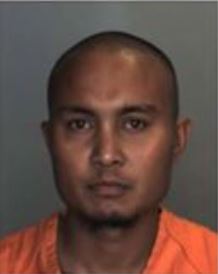 ***UPDATE***9/4/14-  Last week we asked for the public’s help in locating Serek Roduk who was accused of assault with intent to commit rape in Twentynine Palms. Roduk turned himself in to the Los Angeles County Sheriff’s Department on September 2nd.

(VVNG.com)- The San Bernardino County Sheriff’s Department wants to warn the public and request their assistance in locating a man accused of assaulting a female victim and attempting to rape her.  Lynel Serek Roduk, 29 allegedly committed the assault and attempted rape by forcing the female victim out of the front yard of her friend’s home at knifepoint . While committing the assault he threatened the victim that if she screamed he would stab her.

The suspect directed the victim about a block from the residence, that was at the 7000 block of Estrella Avenue in Twentynine Palms. Once away from the area, he forced her to the ground and attempted to rape her while holding the knife at her throat. According to deputies the victim was able to kick Roduk in the face and run away, meeting her friend who was looking for her. Roduk was said to have fled the area on foot and was not captured by the authorities.

The suspect was later positively identified as Lynel Serek Roduk a 5’11 Filipino man weighing 155 pounds with black hair and brown eyes. He has a distinctive scar over his left eyebrow.  Roduk is known to frequent the Break-N-Run Bar and sexually harass females in the Twentynine Palms area.

Roduk is a transient in the Morongo Basin with no known ties to the area. Deputies warn the public that he should be considered armed and dangerous if seen.  A warrant has been issued for his arrest for PC220 (a) (1) Assault with the Intent to Commit Rape.

Anyone with information regarding Roduk’s whereabouts is urged to contact the Morongo Basin Sheriff’s Station at (760) 366-4175.