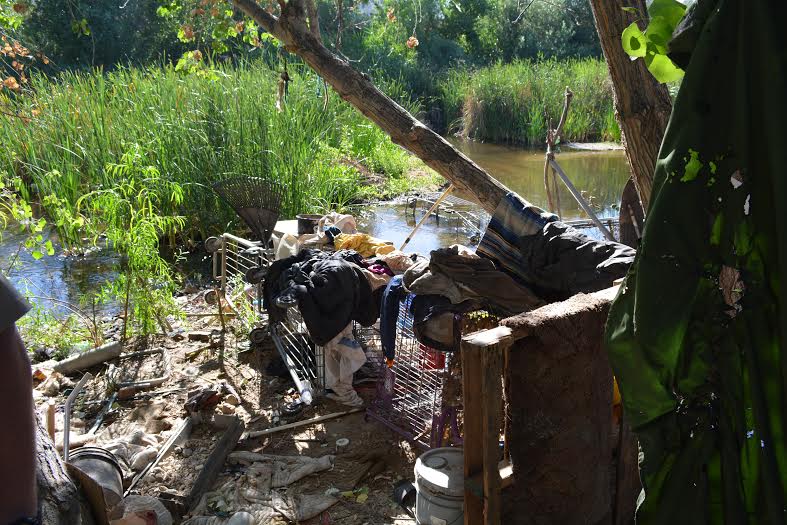 VICTORVILLE-(VVNG.com): The Mojave Riverbed, located just South of Stoddard Wells road is a well-known camp for the Victor Valley community’s homeless population. The homeless living in the vast area of land covered in trees, and other natural shrubbery is home to approximately 70 homeless individuals. These individuals, the majority being adult men, come from all background types, some suffering from mental health issues, some from drug or alcohol dependence, some on probation or parole and others just people who have lost their home believing that they have no other options of where to go. Most have makeshift homes made of wood, some in tents, tarps and others in motorhomes. Areas are sectioned off with fencing, some made of fencing materials and others made of branches or other materials collected in the riverbed areas.

Groups, organizations and church groups go to feed, clothe and otherwise supply the men and women living in this area several days weekly. The Sheriff’s HOPE team, Homeless Outreach Proactive Enforcement was created to help reduce crime through the homeless population by reaching out to them by encouraging them to facilitate the resources offered through the county. The program has provided numerous large rollaway dumpsters for clean up of the area, where groups assisted those living in the area to clean up the area, which was deemed a success with over 3 rollaway dumpsters filled up within hours. “Whenever the hope team goes to the river bed they take at least 2 clinicians from Department of Behavioral Health. They are able to do in field mental health assessments and place those individuals in housing or get them mental health services. However, unless they are a danger to themselves or a danger to others they cannot force them to accept services, to receive housing, or even to take medication. Sometimes

Photo of the HOPE Program Outreach on Tuesday, December 16th

because of drug abuse being the  problem their thinking is not accurate, some suffer from paranoia and have distrust in the system in general.” said Michael Ray Grabhorn with the Department of Behavioral Health.

The City of Victorville is planning closure of the area starting March of 2015 and continuing to mid-2015. According to a recent Sheriff’s press release, the HOPE team has secured 40 HUD based housing vouchers along with over 30 other options to provide housing options for the Mojave Riverbed homeless population prior to the closure. The HOPE team works closely with the Department of Behavioral Health as well as other agencies in order to make the area closure a smooth one for all those involved. “The goal of the Sheriff’s HOPE team, in collaboration with the City of Victorville and the City Police Department, is not to evict, but to help move the Mojave Riverbed population beyond homelessness,” said Sgt. R. McCoy with the Sheriff’s HOPE program.

According to Sgt. McCoy, the city or Victorville does have a responsibility to those in the community, with over 4500 calls made to the riverbed area in the past year. Some of the incidents there have included rape, murder, attempted murder and assault with a deadly weapon which make cleaning up, although a sensitive subject, a necessity for the Victorville Police. Also mentioned was not only safety issues, but health and sanitation concerns.

about.  “It is our hope to not just move these people to another area, that is exactly why we are doing this type of outreach. Our hope is to just not move the problem. We know that moving them is not the solution. We want to move them into homes, not into another area.” added McCoy. The HOPE team has reached out providing solutions to the many problems that the homeless population are facing including helping them replace lost documents, such as birth certificates, social security cards, and Identification cards.

On Tuesday, December 16th, the HOPE team went to the riverbed area, along with the Department of Behavioral Health for an outreach, placing on couple and their dogs into a home  using HUD Housing Vouchers.  They were also able to make 12 other appointments for other individuals living in the area. “We have made contact with all those living in the area, we have discovered the about 22% do have a source of income” added Sgt. McCoy. Sergeant McCoy explained that the plan is modelled after one used at a Riverbed area with an issue close to that of the Mojave riverbed. The program was a success using a humanitarian approach to the situation moving the majority of those living in the area out of homelessness and into homes.

The humanitarian approach is unprecedented for the San Bernardino area, but after realizing the past actions taken, being that mostly from a law enforcement standpoint. “If they do not want help, the Victorville may have to, as a last resort use the laws that are in place. They will be warned and be given ample opportunity to make the transition. Misdemeanor trespassing laws are one of the main things that the Victorville Police may have to enforce after all other options are exhausted. We used to, before the HOPE program, only rely on incarceration. Arresting is not the answer and is exasperating the problem,” said Sgt. McCoy. “They know we are there to help them, any enforcement will be made through the VIctorville Police Department”. The Victor Valley Rescue Mission also praised the HOPE program by saying that they work closely with the deputies to help their homeless guest placing several of their long-term homeless into housing.

Many churches, organization and people in the community have planned to act out in outrage after past newspapers have mentioned eviction and closure of the area. The HOPE program wants to and has been working in collaboration with all other homeless assistance programs to make the transition the most beneficial for all the people in their transition out of homelessness. An area homeowner mentioned his

standpoint on the situation saying that he would like to be able to have that area back. He said the area was once was a safe place where children would look for fish, frogs and be able to just relax in and now they have fear of going there or what they may be confronted with by doing so.

The true compassion for these people on so many levels has been made apparent through interviews with all involved.  “The hardest thing for people is the unknown. If they are living there they know what to expect from day-to-day. If they decide to leave they have no idea what will happen and its scary. That’s why we work with love because we have to reassure them and make them feel cared about and that we will protect them,”concluded Michael Ray Grabhorn with the Department of Behavioral Health.