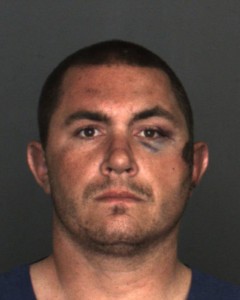 SAN BERNARDINO-(VVNG.com): A settlement has been reached for what appeared to many to be the brutal beating of a suspect by ten deputies from the San Bernardino County Sheriff’s Department. According to several news outlets, the county of San Bernardino has reached a settlement with 30-year-old Francis Pusok for $650,000.

On April 9th just after 12:00 pm deputies arrived at a home in the 25300 block of Zuni rd to serve a search warrant. The warrant was related to an identity theft investigation that was Pusok was not the subject of. When the deputies arrived Pusok fled from the home in a vehicle through Apple Valley and portions of Hesperia.

Pusok, who through investigation was on the run due to thinking the deputy contact was for a probation sweep continued taking deputies through a three-hour pursuit. Pusok continued on stealing a horse and weaving through rough terrain attempting to lose deputies.

According to Sheriff’s Pusok fell from the horse and was tased a couple of times, which proved to be ineffective due to his loose clothing. When Pusok from the view of the camera seemed to put his hands behind his back looking as if he surrendered officers continued to hit and kick the suspect.  Sheriff McMahon, in a press conference on April 10th admitted that the force, by the looks of the video to be excessive. “The video surrounding this arrest is disturbing and I have ordered an internal investigation be conducted immediately”, stated Sheriff John McMahon.

Ten deputies including a detective and a Sergeant were placed on paid administrative leave following the incident and pending a “thorough and fair investigation”.

The settlement was approved by the Board of Supervisors, along with Pusok and his attorney. The county, according to reports is acknowledging no wrongdoing by reaching this settlement agreement, but are doing this to avoid a more costly litigation. The agreement also includes a full settlement that will prevent Pusok suing for any further damages in relation to the April 9th incident.

Pusok, according to court records has convictions including animal cruelty, disturbing the peace, resisting arrest, armed robbery as well as several others.

Pusok is currently released on bail, but according to court records there are no scheduled court dates for the felony evading, horse theft and possession of stolen property in which he was arrested and booked for. At this time it is unknown if dropped charges are a part of this $650,000 agreement.  Information will be updated as it is received.

–Felon Arrested for Shooting a Dog

Verdict Reached for Phelan Man Accused of Killing His Mother