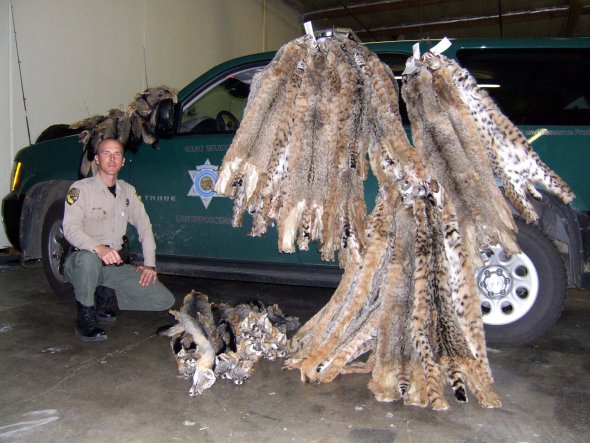 A Sacramento County man recently pled guilty to multiple criminal charges and was fined for unlawfully trapping dozens of bobcat and fox for commercial purposes in northern California.

Tracy Lee Shultz, 57, from Courtland was fined $5,000 and forfeited 60 poached bobcat and fox pelts worth almost $15,000 on the commercial market. Schultz ultimately pled guilty to several violations of the Fish and Game Code, including taking bobcat outside of the established season, unlawful capture and confinement of a live mammal, possession of unlawfully taken pelts, knowingly filing false information to obtain bobcat tags and unlawfully taking wildlife for profit or personal gain. He is also prohibited from hunting, fishing, trapping or accompanying anyone on such a trip during his one-year probation.

In November 2012, Lassen County CDFW Warden Nick Buckler received an anonymous tip from a hunter that commercial bobcat traps were being set before the season opened. Warden Buckler started his investigation, during which he spent nearly every day and night of the 70-day season living out in the sage, bitterbrush, and rim-rock of remote Lassen County observing and documenting the trapper.

“Sometimes the smallest bit of information can lead to a large scale investigation,” said Buckler. “I feel lucky to live and work in a county that cares so much about its fish, wildlife and habitats. The illegal commercialization of wildlife is second only to the illegal trade in drugs and guns for worldwide revenue. There will always be people willing to break laws and exploit wildlife to make money.”

Warden Buckler spent three months observing Schultz, documenting his movements, and locating and monitoring his traps in order to obtain sufficient evidence. At one point during the season, Schultz returned to his Sacramento County home for a week leaving a spotted skunk trapped in freezing temperatures. After Sacramento County game wardens relayed that Schultz remained at home for several days, Warden Buckler released the trapped animal unharmed.

Trapping bobcat for commercial purposes is legal in California with a season that starts on Nov. 24 of each year. Trappers licensed through CDFW are required to check their traps and remove all captured animals at least once daily. Schultz had about 50 tagged live traps set throughout more than 900 square miles of remote Lassen and Modoc counties. This extensive trapping area made it impossible for Shultz to check each trap daily, and allowed him to trap more area, spend less gas and cheat other trappers who followed the law.

Pursuant to state law, all the furs were sold to a licensed fur dealer and the $14,835 check was held in an account while the case was underway. As part of the conviction, the Lassen County Superior Court judge ordered the money paid to the Lassen County Fish and Game Commission, where it will be used to promote and support lawful hunting and fishing, as well as fund wildlife habitat improvement and restoration in the county.

Many times cases such as this could not be made without the assistance of sportsmen and sportswomen who help wildlife officers by reporting poaching and pollution. It often takes the help of concerned citizens in conjunction with the county district attorney’s office to reach successful outcomes.

“Now more than ever wardens need the assistance of the public to protect our valuable natural resources,” Buckler said. “Hunters, anglers, trappers and citizens can be our eyes and ears on the ground. License plates, descriptions and accurate locations are the best information the public can provide.”

If you witness a wildlife crime, you are encouraged to call the 24-hour toll free CalTIP hotline at (888) 334-2258. All calls can be kept anonymous.