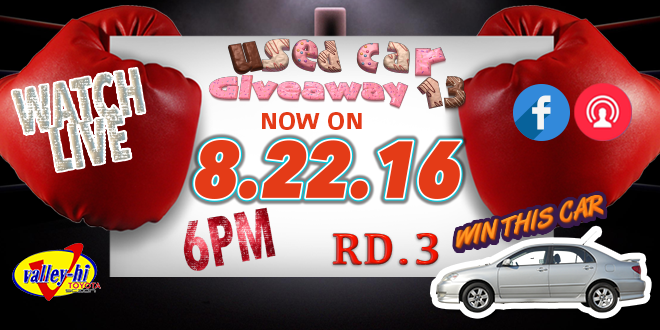 VICTORVILLE, Calif:(VVNG.com)- Two contests are in the bag. So what’s in store for round 3? Throughout August, Valley Hi Toyota has been holding various contests in order to find finalists for Used Car Giveaway #13.

“That’s the beauty of this giveaway,” says Brian Ortega, Social Media Marketing Manager, “Chances of becoming a finalist increase the more people participate. Yet it’s still up in the air when it comes to becoming the winner. This time around each round will have its own finalists- so it can be anybody’s game.”

Originally set for August 18 at 6pm on Facebook LIVE, Valley Hi Toyota will be postponing the 3rd round until Monday, August 22 at 6pm.

“We felt that in light of the situation with the Blue Cut fire and the many lives affected, it would be best to wait until the following week to announce the particulars of the next round. It will involve major engagement and we want everyone choosing to participate ample time to find their bearings during this tragedy,” says Ortega. The Victorville dealership conducted a mini-survey to ask best available time to watch live- the later hour garnered many votes. Special prizes will be given away during the 6pm broadcast. “Those watching live will get a ‘head start’ on the competition. That’s the only hint I can provide.” continues Ortega. Viewers can sign up to get notified here: https://bit.ly/VHTding

Valley Hi Toyota usually promotes current contests, giveaways, and specials on the Victor Valley News Group Facebook banner, but due to the flames overtaking the Summit Inn, the iconic landmark restaurant atop the Cajon Pass, the dealership dedicated its space to mourn and memorialize its place in the High Desert.

“We think this car giveaway came just in the nick of time,” says Todd Stokes, General Manager of Valley Hi Toyota, “The High Desert is going through a lot right now. These major fires have really beaten us down in the High Desert. It’s really great, however, to see our community come together and support one another during these catastrophic events. We’re proud of the Victor Valley and we think it’s about time we had some good news and some friendly competition during the Summer months.”

All finalists from the different contests will be announced later this month via social media and email. The number of finalists will depend upon number of total entries. “We’ve had 50 finalists in the past, but if we reach 12,000 Likes on Facebook, well, that may just change,” winks Ortega.

Used Car Giveaway 13 is open to contestants 18 and older with a valid California Drivers License and proof of insurance at the time of claim.

Visit Valley Hi Toyota during their Construction Clearance Event where you can get a Prius c for as low as $99/month, a 2016 Corolla for $139/month, or get $4,000 off a 2017 Camry XSE. See the progress of the new dealership here. Ortega suggests following Valley Hi Toyota on Instagram.