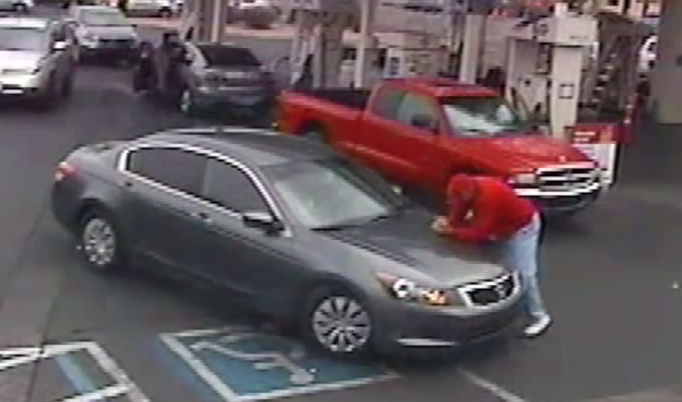 LAS VEGAS: On February 6, 2014 at approximately 11:38 a.m. LVMPD patrol officers were dispatched to a gas station located at 6102 West Flamingo Road to investigate reports of an auto/pedestrian accident. Arriving patrol officers located an elderly adult male suffering injuries to his legs. The victim was transported to the UMC Trauma Center.

The investigation revealed just prior to the incident the victim drove into the station lot when a gray Honda Accord pulled in front of him, causing the victim to drive around the Accord to avoid an accident.

As the victim was walking from the gas pumps towards the store, the suspect vehicle drove around the parking lot and approached the victim at a high rate of speed. The vehicle stopped just short of the victim and then continued forward, striking him with the driver’s side bumper. The victim fell to the ground and was run over by the suspect vehicle causing the victim to suffer significant injuries.

The suspect vehicle was last seen driving out of the parking lot westbound on Flamingo Road.

The suspect vehicle is described as a 2010 or 2011 dark gray Honda Accord with tint on the rear windows only. The vehicle has a California license plate that begins with “6C”. The driver could only be described as a white male in his 30’s with a medium build and he was last seen wearing a gray hoodie.

Anyone with any information about this incident is urged to contact the LVMPD Violent Crimes Section at 702-828-5634 or to remain anonymous contact Crime Stoppers by phone at 702-385-5555 or on the internet at www.crimestoppersofnv.com.