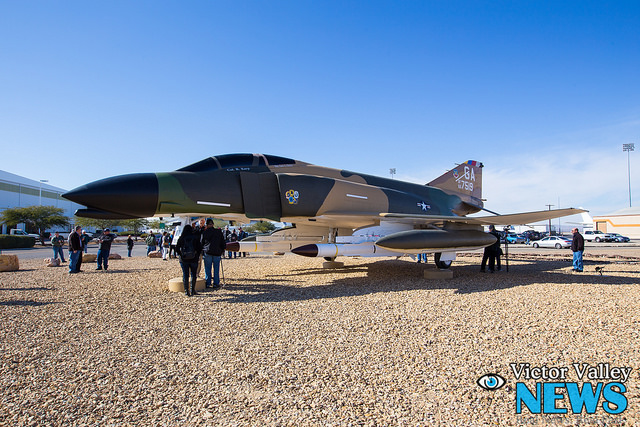 VICTORVILLE, Calif. – With the 75th Anniversary of Pearl Harbor Day in their minds, the community gathered at Victorville’s Southern California Logistics Airport (SCLA) yesterday for the unveiling of a restored F-4C Phantom Fighter Jet that was formerly part of the 35th Fighter Wing at George Air Force Base.

Following the closure of George Air Force Base in 1992, the jet was parked on an airfield at SCLA where it was exposed to the harsh, desert conditions. The jet, which was used by the Air Force in Vietnam, Japan and Desert Storm, deteriorated over the years until a group of SCLA employees and volunteers decided to launch a restoration effort two years ago.

The group restored the jet to its original appearance, but the restoration wasn’t without its challenges. As Airport Director, Eric Ray explained, one of the greatest challenges the restoration team faced was locating tires to fit the 52-year-old jet.

“The tires our team needed weren’t just lying around at the local parts store,” said Ray. Ray explained that some very resourceful volunteers used social media connections to find the tires from a salvage dealer after many months of searching.

“The tires were the critical piece. Once we found them, we could move the jet into one of our hangars to be sanded down and painted,” explains SCLA Lead Worker, Roger Christoffels.

The restoration team reached out to an aviation curator at March Air Force Base for advice about the best way to ensure the restoration would last into the future. They learned that household, latex paint would be the best paint to withstand the elements; but finding latex paint in the proper colors was a challenge.

“I guess people don’t want to paint their houses in drab olive, green and brown colors,” Ray laughed. “We had to have the colors custom-mixed at a local paint store.”

The volunteers who had served in the Air Force were great resources for ensuring the jet looks like it did when it was in service, including the proper tail fin stickers. The last challenge was how to display the F-4C. Of great concern was proper weight distribution. Jake Roberts from PB Engineering Firm was recruited to design structural footings that could bear the jet’s massive weight. Christoffels fabricated steel brackets that connected the jet to the footings for final display.

When the jet was unveiled to the community, Dec. 7, hundreds were in attendance. Many in the audience had served in the Air Force and were stationed at George Air Force Base at some point in their careers. For them, it was a time to reunite and share stories about the F-4C and their experiences in the Air Force.

Many also commented on the significance the jet has to the history of Victorville. “This F-4C is much more than an aircraft to us. It’s a visible reminder of the impact George Air Force Base had on the Victor Valley,” said Victorville Mayor, Gloria Garcia.

“Because so many of us have connections to George, either through personal service or the service of our family members, seeing this jet displayed here evokes an emotional response of pride in our history.”

The F-4C Phantom Fighter Jet is on display just outside the SCLA Administrative Offices where it can be viewed by the public 24-hours a day. The address is 18374 Phantom West in Victorville, Calif.

For more information about the F-4C and the restoration effort, contact Daniel Uriarte, SCLA Airport Operations Supervisor at (760) 243-1907. 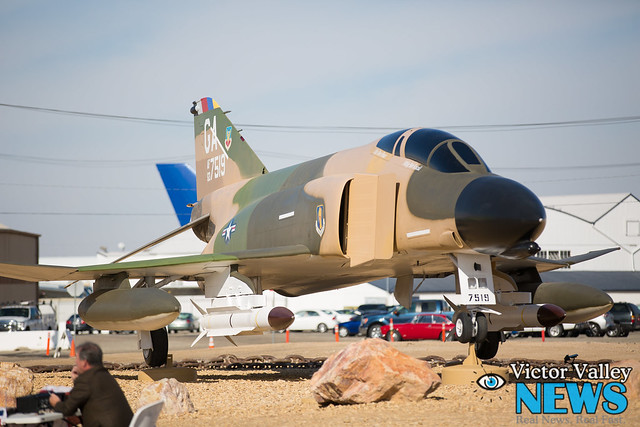