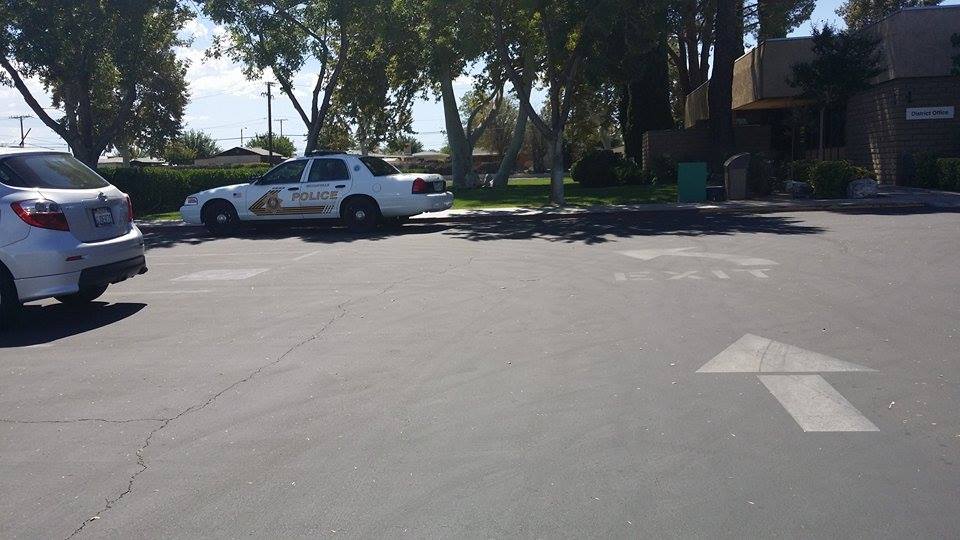 VICTORVILLE:(VVNG.com)- Several local schools, including Victor Valley High School, Goodwill High School and Del Rey Elementary were placed on lockdown following a report of a man with a gun on Tuesday, September 16, 2014 at approximately 10:55 a.m.

According to scanner traffic, a suspect was involved in an altercation with a family member in an area near the campus and had threatened them with a gun. The suspect left the location on foot and reportedly walked through the Victor Valley High School campus. Prompting an immediate lockdown of the entire campus. Police immediately responded and requested a Sheriff’s helicopter to assist with aerial support.

Victor Valley High School parents received an automated phone call describing the lockdown and told parents, they would receive a follow-up call when the campus was cleared and the lockdown was lifted.

Police searched the campus and exterior buildings for the suspect described as a black male, approximately 6’1, wearing a red shirt, tan shorts and a red with black baseball hat. Officers carefully searched each classroom at all surrounding schools before giving the all clear.

Facebook group Victor Valley News served as a central place for worried parents to get current and up to the minute information. Students who were on the campus at the time of the lockdown provided real-time updates, ensuring parents not to worry and that they were all safe. “Everyone here is fine we will be okay, we are strong. We have been through many drills so parents don’t worry, we are in good hands and all doors are locked so we are fine, we are just hungry and have to go to the bathroom,” described one student.

The lockdown was lifted on all three campuses at around 12:30 p.m. VVHS once again sent out an automated call informing parents everything was back to normal.

No students or school staff were ever in any immediate danger.  As a precaution all safety procedures were taken to ensure everyone’s safety. The suspect was located off the school grounds and taken into custody.