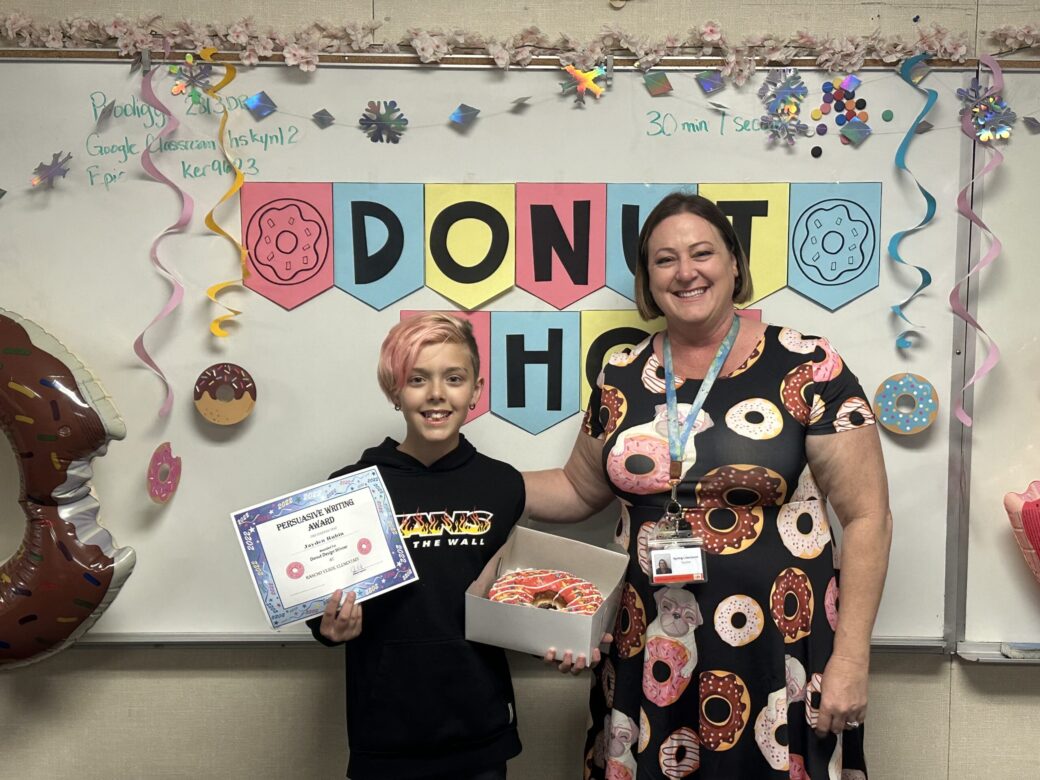 (Mrs. Loenhorst presented the Persuasive Writing Award to Jayden Rubin, who had his designed donut made and sold at a local donut shop. photo Credit: Apple Valley Unified School District)

Just before students went on Winter break, Mrs. Loenhorst’s 5th-grade class at Rancho Verde wrote persuasive essays where they were tasked with convincing Ravin’s Donuts to select their donut creation to sell in their store.

“Supporting our students and helping them grow is my top priority. All assignments, both large and small, bring them a sense of accomplishment and a joy for learning,” said Mrs. Loenhorst, while adding that “Community is so important to our schools and children.”

Mrs. Loenhorst’s fifth-grade student, Jayden Rubin, was able to see, hold, and later taste his creation after he won the Persuasive Writing Award.

His donut was sold for one day at Ravin’s Donuts located at 14664 7th Street in Victorville.

“Ahhh that’s my baby! I’m so proud of him! Thank you Ravin’s Donuts & Ice Cream and Mrs. Loenhorst! And congratulations Jayden for always doing your absolute best and working so hard in school! I love you,” said Jayden’s mother Jessica Rubin.

Jayden’s mouth-watering donut design was made from an oversized crispy vanilla donut, covered with a strawberry frosting and a cherry glaze, topped off with sprinkles and Fruity Pebbles.

Jayden told the store owners in his essay, “Lastly, everyone will love my donut and they’ll buy it so much, you’ll get a boatload of money.”

Before break, Mrs. Loenhorst’s 5th grade class at Rancho Verde wrote persuasive essays where they were tasked with convincing Raven’s Donuts to select their donut creation to sell in their store. Jayden Rubin’s donut was selected and sold in Raven’s Donuts for a day! pic.twitter.com/gWwPwUWRSu

Teacher Thanks Students and Ravins Donuts

“Big shout out to Ravin’s Donuts & Ice Cream for participating and being a part of a wonderful memory for our class.’ Said Mrs. Loenhorst. “Congratulations to our whole class, they all worked so hard and did amazing!! Way to go.”