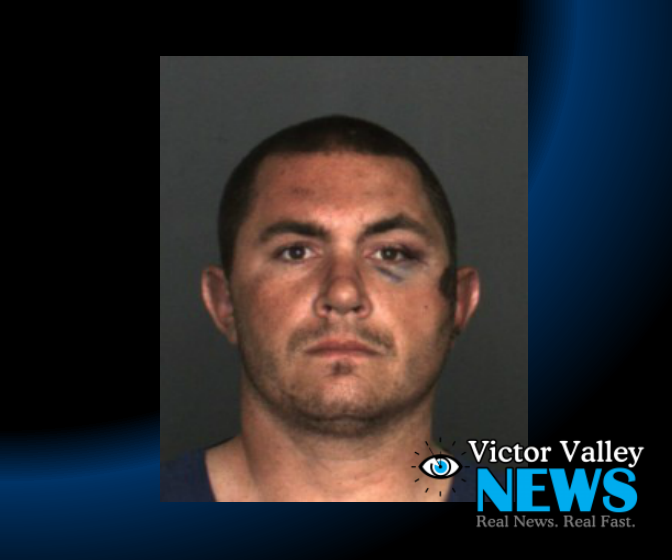 APPLE VALLEY-(VVNG.com): It seems like not a day goes by without hearing some mention in the media of 31-year-old, Francis Pusok.

According to a press release, on October 20th at about 1:15 p.m. deputies responded to the report of an assault at a home in the 11000 block of Caribou Avenue.

The victim said that as he was changing the locks at the residence following an eviction and Pusok insisted on removing some of his belongings from the home. When the victim told Pusok that he was not allowed to enter the home, Pusok allegedly hit the man in the face causing the victim to fall. The man was treated for neck and back injuries as a result of the assault.

The name Francis Pusok made national headlines on April 9th, when Pusok stole a horse, evaded arrest, and allegedly committed several other crimes all while under the influence of a controlled substance according to authorities.

When deputies finally caught Pusok that April evening, NBC4 helicopter footage showed what was later to be determined to be excessive force used by deputies during his arrest. Pusok was awarded a $650,000 settlement from San Bernardino County for the incident and three of the ten deputies are currently facing assault charges as a result of the incident.

According to public court records, the latest charges as a result of the October 20th incident are assault by means of force likely to produce great bodily injury, burglary and willful cruelty to a child. Inmate records show that Pusok was released on $50,000 bail from the High Desert Detention Center on Saturday, October 24th at about 5:52 a.m.

Pusok refused a Friday morning jail video arraignment and although inmate records do not show a set court date Pusok is reportedly set to appear in court for arraignment on the most current charges on Monday, October 26, 2015.