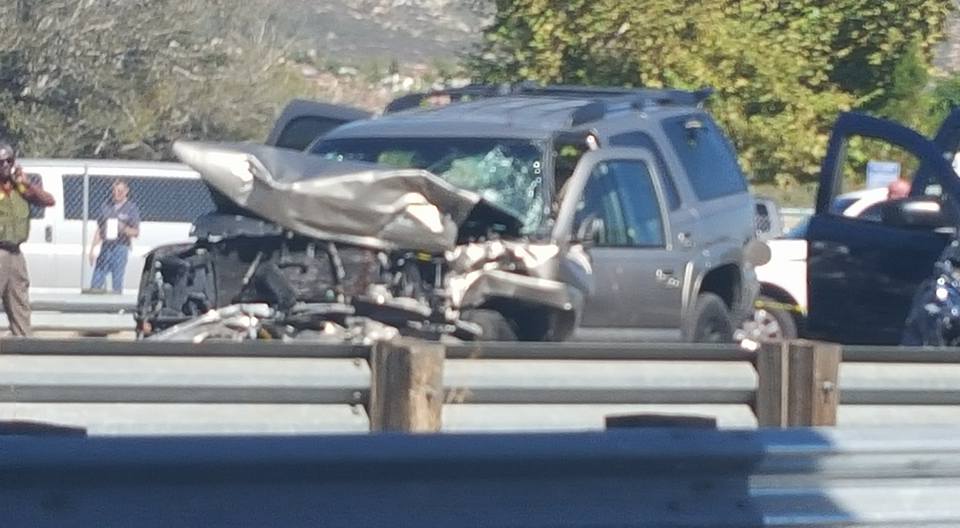 SAN BERNARDINO:(VVNG.com)- The northbound 215 freeway is closed for an unknown duration following a pursuit that ended in a fatal officer involved shooting.

It all started on Friday, September 18th at about 12:49 P.M., when deputies from the Sheriff’s Specialized Enforcement Division attempted to take a home invasion robbery suspect into custody.

The suspect failed to stop and authorities initiated a pursuit. At one point, the suspect sideswiped a vehicle and reached speeds of 100 MPH.

According to Public Information Officer Olivia Bozek, “the pursuit went through Fontana, San Bernardino, and onto the 215 freeway”.

The suspect started driving the wrong way on the northbound lanes of the 215 freeway. During the pursuit an officer involved shooting took place.

“While wrong way on the 215 freeway the suspect exited the vehicle. The vehicle continued to move and crashed into another uninvolved vehicle”, stated Bozek.

After the crash, the driver of the vehicle being pursued, jumped out and was killed. According to Fox 11 News, “A sheriff’s deputy sharp shooter in a helicopter shot and killed (the) suspect on the 215 Freeway in Devore.”

The suspects champagne colored SUV is riddled with multiple bullet holes on the hood. A yellow sheet could be seen covering the suspect’s body near the shoulder of the freeway.

Three occupants from the uninvolved vehicle were taken to local area hospitals with unknown injuries.

Caltrans District 8 ‏tweeted the following, “NB 215 to Devore is closed until further notice – All Routes to the High Desert will be heavily congested through the evening commute.”

The coroner will release the cause of death pending the autopsy. The Sheriff’s Specialized Investigation Division is conducting the investigation.