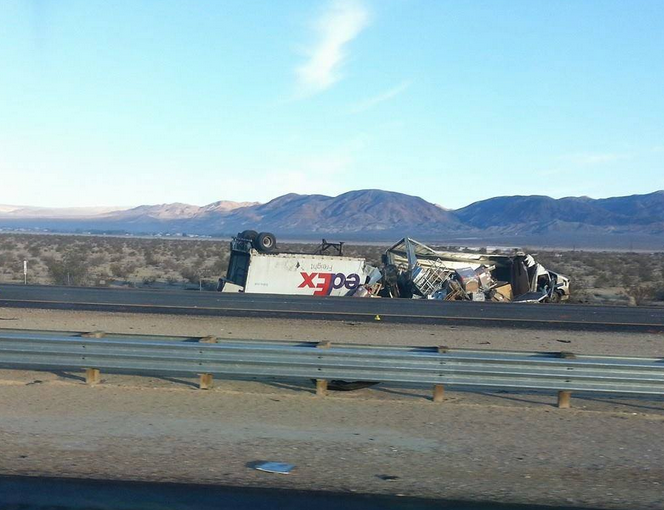 YERMO– (VVNG.com): At approximately 11:05 p.m. on December 9th a Barstow Sheriff stopped a Lexus displaying paper plates. The driver, who was the sole occupant of the vehicle identified himself as Aaron Frye, 37 of Long Beach. Frye was found to be on probation for robbery in

Los Angeles County. When the deputy had Dispatch query the Vehicle Identification number, the vehicle came back as a vehicle that had been stolen from Cerritos.

The deputy requested a second unit as back up prior to ordering Frye out of the vehicle. Frye was cooperative with the deputy placing his hands on the steering wheel. For unknown reasons Frye reached over towards the vehicle console, the deputy feared the suspect was reaching for a weapon, which caused the deputy to fire his service pistol at the vehicle.

Frye drove away from the stop re-entering the 15 freeway southbound. The responding deputies located the stolen vehicle about 1 mile north of Ghost Town Road in the number one (fast lane) of traffic. The vehicle had collided with a FedEx tractor-trailer causing the FedEx truck to overturn on the right shoulder area of the freeway. The FedEx driver was treated at a local hospital and has since been released.

Frye fled the scene on foot into the desert area northwest of the freeway. After an extensive ground and air search done collaboratively facilitating patrol deputies, detectives, bloodhounds and Sheriff’s aviation did not locate Frye. The efforts were not successful in capturing the suspect and he is still at large.

The California Highway Patrol is conducting the investigation of the traffic collision.