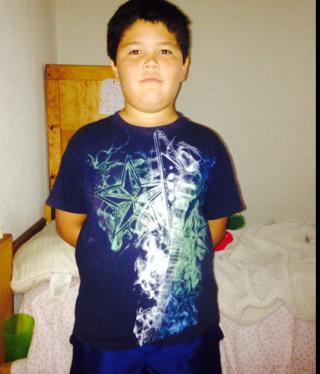 Traci and Quintin Gilliam. These two are said to have Tavis with them at this time.

(VVNG.com)- Phelan resident,Tavis Toi Gilliam went missing from his sister’s Las Vegas, Nevada home on Thursday, July 3rd at approximately 12:00 p.m.  9-year-old Tavis was planning to spend a week at his sister’s Las Vegas home visiting then was expected to be picked up and returned home with his mother.

The plan did not go as expected when Tavis’ father, Quintin Gilliam, who lives in Utah went to the Las Vegas home and forced Tavis to go with him by pushing him into his vehicle. The vehicle is only described as a black sedan, the license plate number obtained by witness’ did not match the vehicle description. “My sons dad has been out of the picture for about a year. I have no idea how he found him,” said Tavis’ mother, Jennifer Close-Leach.

Tavis’ father and mother have joint legal custody, his father having physical custody and his mother is to have him from 6pm Friday to 6pm on Sunday. His father had not seen, nor has he asked to see his son for about a year leaving Jennifer with sole custody during that time.

Tavis has brown hair and brown eyes, he is 9 years old and his height and weight are unknown. Quintin, Tavis’ father is approximately 5’8, 150 pounds, and has brown hair and brown eyes.  The two are accompanied by Quintin’s wife, Traci Gilliam. Tavis mother as well as authorities have been calling Quintin but the calls are not being answered and are going to his voicemail..

Reports have been made to both Las Vegas Police Department and Victorville CHP. If you have any information regarding the whereabouts of Tavis, Quintin or Traci Gilliam please contact the Victorville CHP at (760) 241-1186 or call 9-1-1.