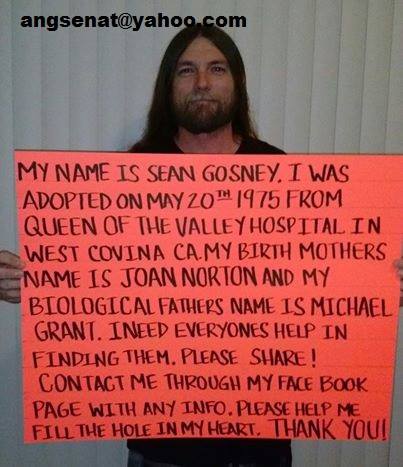 (VVNG.com)- Sean Gosney, 39, was adopted on May 20th 1975 from Queen of the Valley Hospital in West Covina.  He was born to a 17-year-old mother by the name of Joan Marie Norton and biological father, Michael Grant.  Young Joan according to Gosney, planned to give the child she was carrying up for adoption. The adoptive mother of Gosney, who is now deceased, was unable to have children and through a friend was introduced to the attorney who was handling the adoption for Norton.

In the Adoption records from Los Angeles County, the delivering doctor’s name was John Schroeder and his office was located on Merced Avenue in West Covina. There is also an address on the document leading them to go to a home on East Service Avenue in West Covina, where the family of his mother no longer lived.

When visiting the address, neighbors in the area shared information that they knew about the family who lived in the home prior to the new residents moving in. The neighbors, who remembered the family recalled the parents living in that home to be Rocco and Lynn Macri. They believe Joan had a younger brother named Rocco Macri Jr.  Rocco Jr. was described as a bit of a wild child, a neighbor told a story of him having a house party when his parents were not home.

Although, according to his wife, Gosney is very shy he agreed to take a picture holding a sign in order to reach out to the public in order to possibly help locate his birth parents. The sign he is holding in the photo has all the pertinent information surrounding his 1975 adoption and asks the public to help him fill the hole in his heart.

Sean Gosney is asking that the public takes just a few minutes to share his story in order to assist him in locating his birth family. The more everyone shares, even outside of the state, the better the chances of Gosney locating the family he has longed for. If anyone has any information that may help lead him to his biological parents, please contact the email address on the photo.