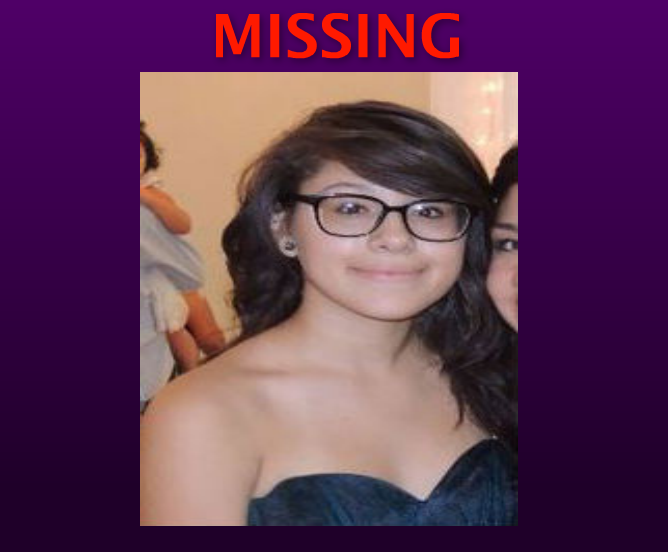 UPDATE:9/24/14- According to the mother of Clara, she has now been located. Clara was picked up after being dropped off alone at a Victorville McDonald’s where the people whom she was with dropped her off. Her father received a call from the adult woman and 16-year-old boy she was with at the time letting them know where he could pick her up. The aunt and mother of the missing teen said that upon being picked up Clara had shared that she was with the adult that she had been speaking with through private message and the woman’s son, Clara’s boyfriend.

The family plans on taking Clara to a local doctor for a pregnancy test since Clara claims that her boyfriend’s mother took her to the doctors where she was confirmed to be pregnant. “We can not really go by what Clara says at this point, so we are taking her in to be seen,” said the young girl’s aunt. The aunt of the teen also stated that the abuse allegations are totally false since her and the mother of Clara were abused by their parents as children. “Clara’s mother would not even spank her children. She said she did not want her kids going through what we went through as kids,” added her aunt. She also stated that she does not doubt that the teen girl may have told untrue stories because that is just the type of child she is.

Clara’s mother and father, although no longer in a relationship remain great friends and have decided to let her stay with her father so she can get her mind back on school and regular teen things.

VICTORVILLE:(VVNG.com)- Clara Padilla has now been missing since September 18th and her parents have been searching relentlessly to find the 14-year-old Victorville girl. Clara is one of seven children, her mother is deeply concerned with her child’s well-being. Her father has flown in from Las Vegas to assist in the search of his daughter. Jennifer Villanueva, mother to Clara is concerned that her young daughter may have been coerced or at very least being convinced to leave home after reading text and Facebook messages sent between her daughter and the mother of her teen boyfriend’s mother.

Villanueva is worried about her daughter, who has had cutting tendencies and was once diagnosed with ADHD, which she has not received  treatment for. Clara has possibly made up stories of abuse since the mother of the boyfriend in the past has accused her mother of abuse and the failure to protect her from abuse. “I do not abuse my children. I have lost my whole family turning someone in the family in for abuse on my children in order to protect them. This was many years ago, and after investigation surrounding it, we were relieved to find out that Clara was not a victim to that abuse,” said Villanueva.

The adult woman, who has recently befriended her daughter has been methodically planning a marriage and pregnancy between Clara and her 16-year-old son. She has not only tried to convince Clara’s parents to let them get married, but she has sent Clara both Facebook messages and texts encouraging the idea. The mother of Clara’s boyfriend has also provided Clara with multiple pregnancy tests, which leads her distraught mother to think she may not only be missing, but also possibly pregnant or trying to get pregnant.

Clara’s mom is at a loss of what to do, the police have a report and are looking for her, but still as a mother she feels hopeless. “I have a heart condition, we have been searching for Clara day and night. I am not feeling well, I have to go to the hospital and they likely will admit me overnight,” said Villanueva. According to Villanueva, she has also been threatened by the boyfriend’s mother, which causes her to be concerned for the well-being of herself and her family.

Clara is approximately 5’3-5’4, she weighs about 120 pounds, she has brown hair and brown eyes. According to her mother, she is Hispanic, but looks Caucasian. She has a mole near her eyebrow and has large black framed glasses that she wears.