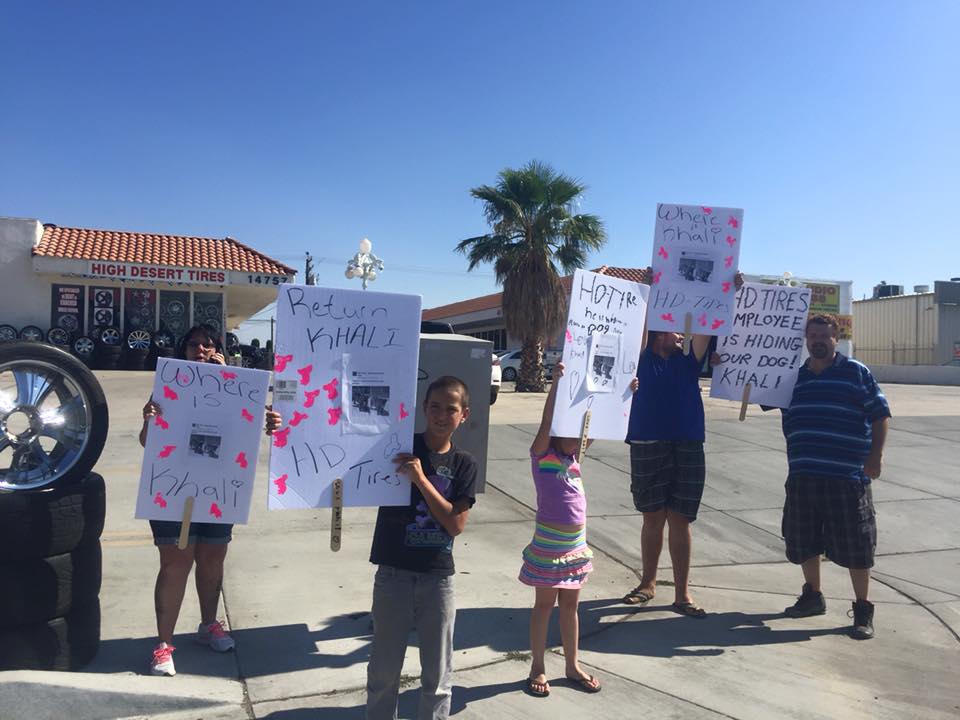 HESPERIA: (VVNG.com)- A group of protesters has descended upon a local business in hopes to help reunite a family with their lost pet.

On Friday, July 1st a local family desperately trying to find their American Bulldog Khali who had run away. Came across a Facebook posting of a dog with identical features for sale by a Facebook profile claiming to be a high desert business.

David and Rosemary Shynovick, the original dog owners, did everything within their power to schedule a meeting with the person behind the profile so they could positively identify the dog. When every attempt was avoided, they began to do some digging.

Through their investigation, they discovered the post was allegedly created by an employee using his personal Facebook account named “HD Tires.” The post featured a uniquely colored brindle bulldog. With a statement saying “for sell $600”.

That’s when the Shynovick’s noticed a picture of the business card for the Victorville business “High Desert Tires” On the alleged Facebook account.

The couple alleges after reaching out to the business via telephone they were told the employee who made the post under the “HD Tires” profile wasn’t at work that day. Then later denied any affiliation with the employees actions and claimed he was fired.

Finally, the couple was able to get in touch with the employee and he denied having the dog.

“He said he was supposedly posting for a friend he didn’t really know to get a cut, eventually the phone number was disconnected,” says David Shynovick.

A Victor Valley News reporter contacted High Desert Tires and they also denied any responsibility in saying “we handled the problem already and it does not reflect us. This is a business, we really just don’t want any trouble.”

The “HD Tires” profile has since been deleted from Facebook. The official business page has received dozens of negative reviews and a 1-star rating.

A report was filed with the San Bernardino County Sheriff’s Department, and if anyone has any information please report it immediately for this couple really wants their family member back.