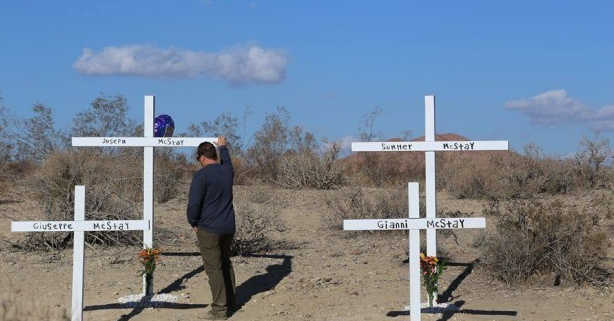 VICTORVILLE: (VVNG.com) This month marks the one year anniversary since the discovery of the McStay’s family, whose bodies were located near the Stoddard Wells Road exit just west of Victorville in a shallow grave containing the family of four; a mother, a father and their two young boys.

In February of 2010 the family disappeared from their home in San Diego County, leaving a mystery of their whereabouts for almost 4 years. Family and friends were left in the dark when they had no leads or tips on what could have happened.

Rumors of the McStays heading across the Mexican border surfaced based on a grainy video located by officials, and their car being located near a strip mall not far from the border.

It wasn’t until Monday, November 11, 2013 at approximately 10:00 a.m., deputies from the Victorville Sheriff’s Station were dispatched to the desert area between Quarry Road and I15, north of Stoddard Wells Road in the county area of Victorville, following the report of possible skeletal remains being located by a motorcyclist. Deputies responded to the location and the Coroner wererequested and confirmed the remains were human.

On November 7th, 2014 at 9:00 a.m., authorities from the San Bernardino County Sheriffs Department are expected to hold  a news conference where they plan on releasing new information on the McStay case.

According to a Facebook post by Michael McStay ( the brother of the deceased victim Jospeh McStay) he stated “Thank You Lord…. Today is a Beautiful Day for Justice!!!!”

A Victor Valley News reporter will be on scene covering the news conference. Please check back for more details. www.VVNG.com and join our news group with over 50,000 members www.Facebook.com/groups/VictorValleyNews