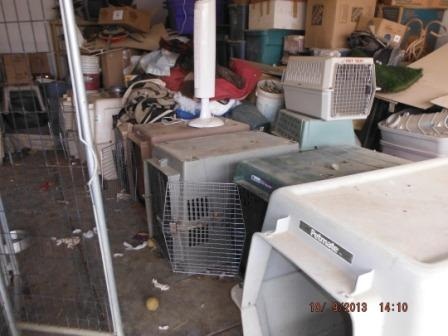 Apple Valley, CA – December 10, 2013: The Superior Court has ruled in favor of Apple Valley Animal Services, granting a preliminary injunction against Mary Ryan.  After hearing arguments from both sides, the Court agreed that the Town had demonstrated a likelihood of prevailing at trial on the merits and that the balance of the interests favored imposition of the injunction.  The injunction will remain in place until the case is concluded.

The Order to Show Cause hearing regarding a Preliminary Injunction occurred on December 2 in Department S-37 in San Bernardino County Superior Court.  This ruling followed a temporary restraining order that was issued against Mary Ryan in early November 2013.  The order barred her from operating an animal rescue operation until the Dec. 2 hearing.

A separate criminal hearing for thirty (30) infraction charges of animal limitations and dead animals is scheduled for January 15, 2014.  Separate from the infraction charges, an investigation of alleged crimes against animals is ongoing.  The Town’s criminal complaint will be forwarded to the District Attorney.

Ryan, who identifies herself as the founder of German Shepherd Angels Rescue has been given the option to release custody of the seized dogs to Animal Services. This would allow the dogs to be placed into permanent homes or non-shelter housing.  The dogs have been at the shelter since Oct. 9 and Administrative Orders indicate that Ryan will be responsible for all costs associated with impound, medical treatment, and ongoing care until the dogs are released from the Town’s facility.

Court documents prohibit Ryan, agents, aiders, abettors, or entities acting on her behalf from selling or rescuing dogs in the Town of Apple Valley. The Town maintains that Ryan had been illegally operating an animal rescue business out of a home she rents on Sholic Rd in Apple Valley.  In addition, the Town reports that Ryan has failed to provide copies of maintained records of health, including dates of administration and the type of vaccine or treatment provided to dogs in her care.

“Our wish is that all dogs can be placed in a non-shelter setting, preferably permanent homes, before the Christmas Holiday,” Animal Services Manager Gina Schwin-Whiteside said.  “We have started a list of 501(c)3 Animal Rescue Organizations that have offered support and placement assistance, should the need arise.”  Staff will notify the public should the dogs become available for adoption or foster placement.

Anyone wanting to be placed on a wait-list should email avasrescues@applevalley.org