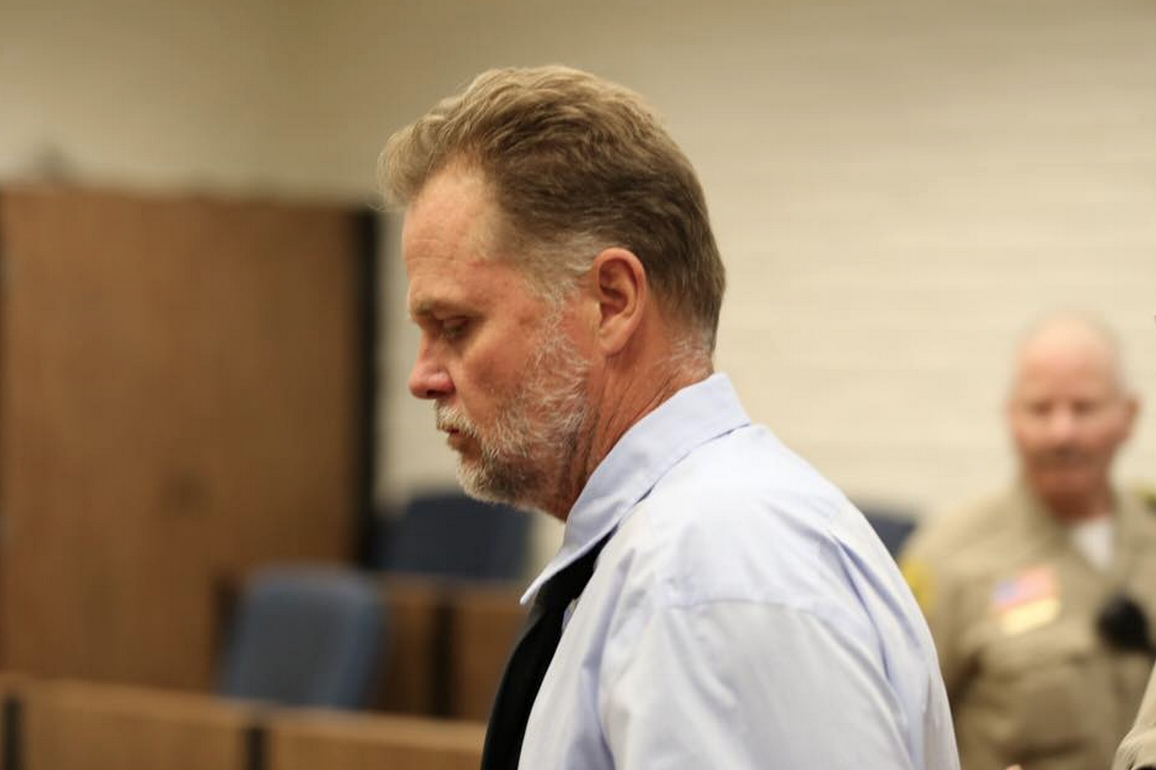 SAN BERNARDINO-(VVNG.com): The trial regarding the senseless murder of an entire family of four, including two children began today with the Preliminary Hearing. The preliminary hearing, also called an evidentiary hearing is a hearing that is set to determine if there is enough evidence to move on to trial.

On Monday, June 15th, several media outlets hurried over to the San Bernardino courthouse to get their position in the courtroom for the hearing that was set to begin at 9:00 a.m. During the search for the missing family, the case attracted widespread media attention. When the shallow graves were located in an unincorporated desert area near Victorville the public interest in the case multiplied.

The courtroom had several reporters, and Charles “Chase” Merritt supporters as well as those there seeking justice for the McStay family. In all the approximately 20 supporters and justice seekers were separated on opposite sides of  the courtroom. At exactly 9:00 a.m. Merritt walked into the courtroom with very little expression, as in past hearings. He was dressed in professional attire with a button up shirt and a tie.

All parties were sworn in and the first witness, Det. Gary Hart took the stand. Hart shared that numerous human bones were found at the grave site which included 4 ribs, belonging to a children.

The second detective to take the stand was Det. Jose Armando Avila, who stated that graves were identified by detectives as grave “A” and grave “B” which were 20-25 feet apart. Two fractured skulls, one of an adult and one of a child were located in grave “B”. Also within grave “B” they discovered a rusted 3-pound Stanley brand sledgehammer. In addition to the sledgehammer, adult and child clothing, a Body Glove cell phone case, a black bra, a socket cut from white extension cord and a child’s backpack.

Avila also mentioned the discovery of two sets of tire tracks, a set going to each of the two graves. These vehicles appeared to have backed up to the graves. Avila said that the tires of the apparently, two vehicles were, 73″ in width, the other set measured 76″ in width

The third witness, Det. Ed Bachman testified that Joseph McStay’s skeleton, which was wrapped in a blanket, had an extension cord wrapped and knotted around his neck. He also had a large hole on the back left side of his head. Joseph McStay had four blows to his head as well as several other broken bones. It was also determined that he had fractures to the base of his skull, his right tibia, and to a rib.

Summer McStay also had multiple fractures including those to her jaw and frontal bones. Her cause of death being determined as blunt force trauma to the head. Gianni McStay, only four at the time, had at least seven blows to his head. Joseph Jr., only three is believed to also have died due to blunt force trauma to his head, but his remains were so minimal that the cause of death was not able to be positively determined. The sledgehammer was determined by the forensic pathologist, according to Bachman, to be consistent with the injuries.

Bachman then described the sequence of events, from the gravesite in descending order back to the home of the McStays.  He also described how the missing person’s report came about saying that Michael McStay, Joseph’s brother told detectives that he was contacted by their father on February 8, 2010. Patrick McStay, Joseph and Michael’s father told Michael he was unable to reach Joseph making Mike first try calling his brother, then driving over to his Fallbrook home. Upon arriving Michael found that none of the family was at the home. Mike McStay also told detectives that he received a call from Charles “Chase” Merritt “out of the blue” looking for Joseph McStay.

Michael, believing that his brother and family may have just been  on vacation, did not again become concerned until February 13th, when he climbed into the home through a window and let Merritt into the home. A missing person report was filed on February 15, 2010. When the detectives entered the home, Michael told them the cover for their Futon was missing.

When Det. Det. Joseph Steers testified that the family was repainting their kitchen in tan and off white. Blue painters tape was used while painting the home, which they found some of wrapped inside a towel in one of the graves, as well as a small amount of paint on the handle of the sledgehammer and on Summer McStay’s bra. Joseph was wrapped in heavy woven tan material consistent with that of the missing futon cover. Two white towels matching those belonging to the McStay’s was also found in the graves.

Det. Duval from the San Diego County Sheriff’s Department, said that during an interview, when the family was still considered missing Charles Merritt he referred to the missing family in the past tense. He told Duval that he last say Joseph McStay on February 4, 2010 when they had a business meeting at a local Chick-fil-A restaurant.

During the interview, Merritt consented to a DNA swab, that matched DNA that was found in the McStay’s Isuzu Trooper that was found abandoned on the Mexican border. Although Merritt claimed to have never driven the vehicle, DNA matching that of Merritt was found on the gear shift and radio of the vehicle.

FBI Special Agent Kevin Boles reported that there were 27 calls between Merritt and Joseph McStay on February 4, 2010. There were an additional three unanswered calls made from Merritt to Joseph McStay on February 5, 2010. He said that multiple cell phone pings linked to the cell phone belonging to Merritt, were in Victorville and Oro Grande. Records that were reviewed by Bowles dating back to 2009 show that only one time before February 6, 2010 a call from the Victorville or Oro Grande area was made by Merritt.

The preliminary hearing is still in session, but at a recess until 1:30 p.m.  information will be updated as it becomes available.