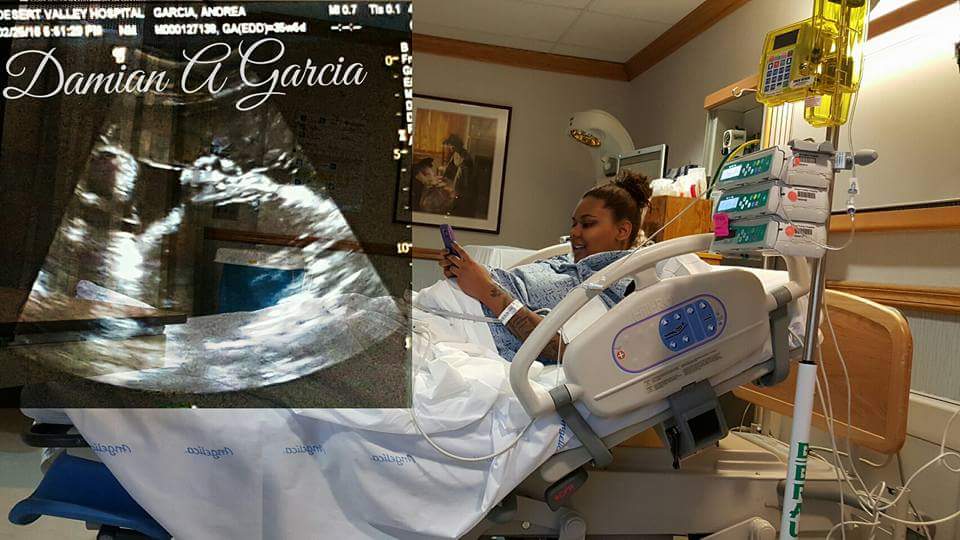 VICTORVILLE-(VVNG.com): At 1:14 p.m. on Thursday, February 25, 2016, a 25-year-old pregnant Apple Valley woman was leaving an appointment at the San Bernardino County office located at 16453 Bear Valley Road when a vehicle backed up almost hitting her 2-year-old son. She was able to grab her son, swinging him around to her other side, away from the vehicle, but could not avoid being hit by the vehicle.

The woman, identified as Andrea Garcia was hit with the bumper, pinning her leg under the back tire of the vehicle. “ I was hitting her car after she hit me and she still kept going back,” said Garcia.

She was transported by ground ambulance to Desert Valley Hospital, where she was treated at the hospital for contractions that began after the incident. Garcia told Victor Valley News that she received IV fluids, an ultrasound, and a shot to stop contractions.

“Hug your kids tight, if it wasn’t for my fast reflex it would have been my son under her car”, said Garcia. Garcia said that the woman never apologized, never showed concern and even blamed her as she apparently got out of her vehicle while on the phone. She said the woman told people in the parking lot that Garcia rushed to the back of her car causing her to get hit.

Garcia said that one woman did stop to help her and she is grateful for her help.”I was really looking for the lady that helped me out because I never got to thank her in person after all the help she was for me and my son,” added Garcia.

Garcia was transported to Desert Valley with contractions but otherwise suffered no major injuries as a result of the incident. She was observed until just after 10:00 p.m. and released from the hospital.

According to Hesperia public information officer Karen Hunt, “The driver of the vehicle was a 30 year old female of Victorville who was driving on a suspended license. Driver was cited and vehicle was impounded.”