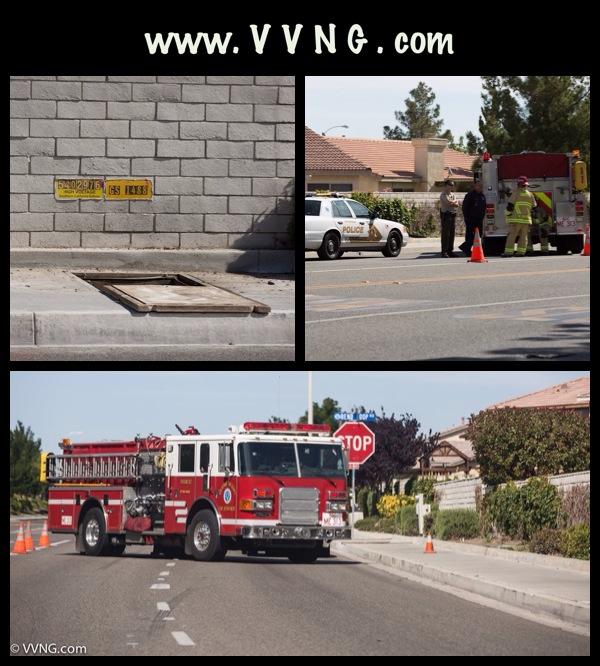 UPDATE: Approximately 657 resident’s who live adjacent to the underground vault unfortunately remained without electricity for all of Sunday. They are expected to be fully restored by 12:00 p.m., on Monday. per Southern California Edison. Brentwood Elementary school is out of business and Leadership is also closed today due to the power outage. It’s reported many teachers and parents still had to show up on Monday morning because not everyone has a viable phone number on file with the school to have received the call about school being cancelled).

[googlemap src=”” align=”alignright” ]VICTORVILLE:  San Bernardino County Firefighter’s responded to an underground vault that reportedly caught fire just before 10:00 a.m., on Sunday morning. The cause of the fire is unknown but has left many people in the Brentwood community without electricity.  The underground vault is located near the intersection on Hook blvd and west Reno Loop.

Sheriff’s dispatch received calls from people in the area describing what sounded like multiple explosions. When firefighters arrived the fire was already out. But the smell of smoke still lingered in the air.

The High Desert Church (HDC) on Hook blvd. has also been left without power due to the outage. Attendee’s have informed us that Sunday services will continue as planned thank’s to a back up generator at the church.

At this time it’s unsure exactly how many customers have been impacted by the power outage. No injuries were reported. Power was restored for most of the Brentwood community just before 11:00 a.m., on Sunday.

For more late breaking news be sure to join our FB group “VVNG” with over 34,000 members.