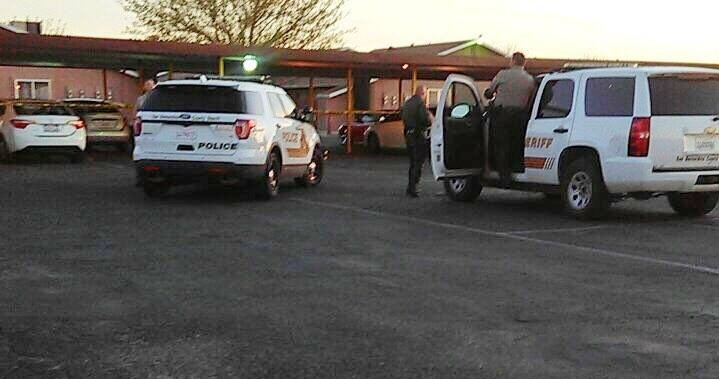 ADELANTO:(VVNG.com)- Deputies from the San Bernardino County Sheriff’s department are actively searching for a vehicle involved in a shooting that occurred in the city of Adelanto on Wednesday.

At about 5:30 P.M., a suspect inside a vehicle opened fire aiming at a victim inside the Desert Oasis Apartments located on the 11200 block of La Habra Avenue near the corner of Bellflower Street.

According to scanner traffic, the vehicle was occupied by two suspects described as black male adults, possibly in their early 20’s. The suspect vehicle is described as a 1970’s Pontiac Grand AM/Grand Prix black in color, with dark tint and chrome wheels. The vehicle was last seen heading southbound on Highway 395 and believed to be traveling down the hill.

The victim was taken by personal vehicle to a hospital with unknown injuries. Residents who live in the complex told Victor Valley News trails of blood could be seen throughout the parking lot.

Police are currently investigating the scene and have crime scene tape surrounding the parking lot of the apartment complex. The Sheriff’s department was unable to provide any additional information at the time of the article.

The story is continuing to develop and specific circumstances surrounding the shooting remained unclear.

Anyone with information is urged to contact the San Bernardino County Sheriff’s Department at (760)241-2911.

Related Topics:Highway 395Shooting
Up Next