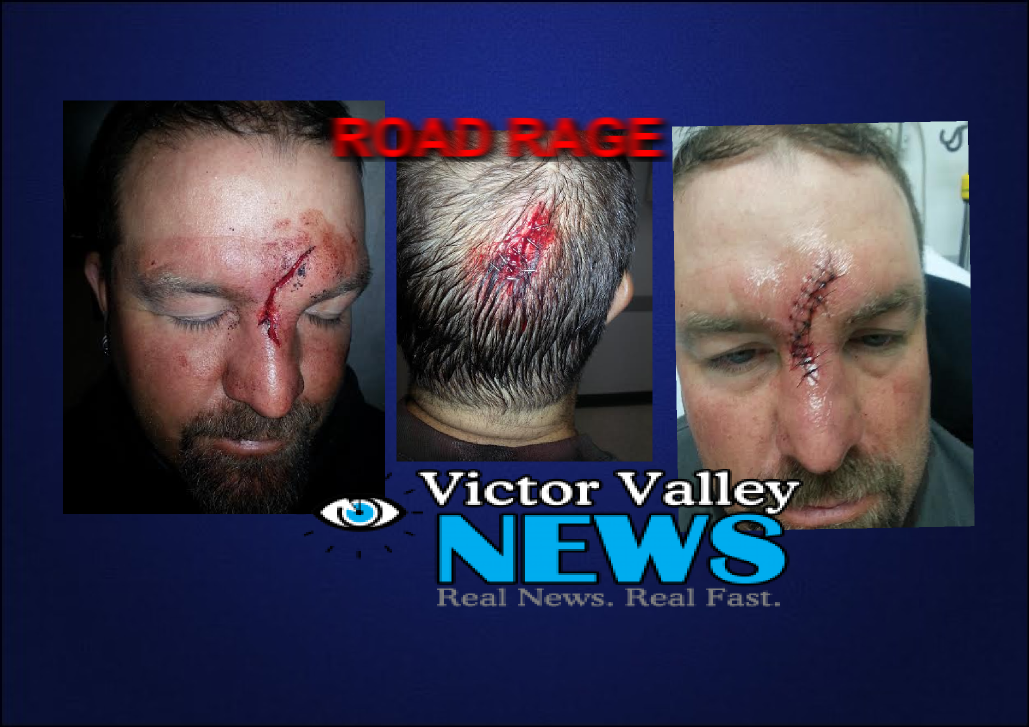 HESPERIA-(VVNG.com): At approximately 9:30 P.M., on Wednesday, May 13th, a Hesperia man exited on Ranchero road behind two other vehicles.

The two cars, that appeared to be a Dodge Durango and a white compact car, possibly a Toyota Camry, were ahead of him and the two were brake checking each other.

The victim, who was driving an older green Toyota pickup truck, swerved to avoid hitting the other two vehicles ending up in front of them. When he got around the vehicles, the driver in the white sedan went on to the opposite side of the road, threw what appeared to be a beer can at him then forced him onto the dirt shoulder area of Ranchero road and Cottonwood avenue.

“As soon as he looked up after putting his truck into park, he saw the passenger coming toward him swinging a dark-colored object,” said Tawnya, the wife of the victim.

The suspect hit the victim in the face and back of the head several times before leaving the scene.

The man believes that the object was a flashlight, since before that, the passenger was flashing a flashlight out the vehicle window.

The assailant is described as a white male adult, in his 20’s, approximately 6’ tall, 190-200 pounds, with blonde spiked hair. He was wearing an orange-colored, possibly construction shirt. The victim believes there were a total of three occupants in the white sedan at the time of the incident. Once the assault ended the man described his face to be so bloody he was unable to see much besides for the blood.

The man called his wife and let her know he was on his way home, a few blocks away from the incident. He explained to her that he was beat badly in the act of road rage as he drove home. She told him to wait so she could pick him up, but he continued to drive home. When he arrived at the house he was bleeding profusely from his head and face. His wife attempted to clean the wounds, but was unable to control the bleeding so she took him to a nearby hospital.

A San Bernardino County Sheriff’s deputy took a report at the hospital.

The injured victim received eleven stitches in his forehead, seven staples in the back of his head and three staples near his ear on the left side of his head. He returned to work on Monday, but due to the severity of the pain had to leave early. Now the man and his wife want to make sure these assailants are caught so they can never do this to anyone else. The man also asks, “Why? What did I do to deserve this?”.