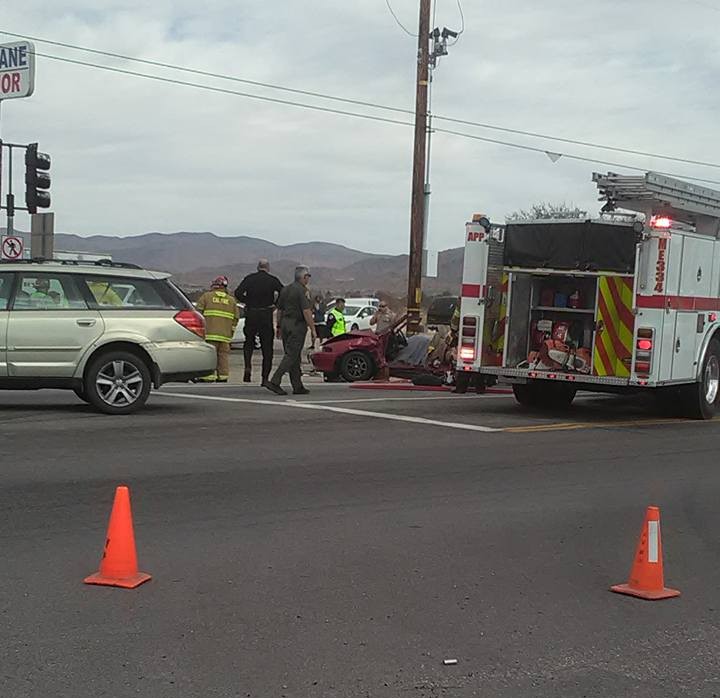 APPLE VALLEY:(VVNG.com)- Police are actively searching for a hit-and-run driver who left the scene of a fatal accident. The two vehicle traffic collision was reported just after 11:40 AM., on Wednesday, February 17, 2016.

The vehicles involved, a red Mitsubishi Mirage and a gold-colored Subaru collided at the intersection of Bear Valley Road and Central Road in Apple Valley.

Immediately following the crash, the male driver of the Subaru ran from the scene of the accident.

According to authorities at the scene, the Subaru was traveling east on Bear Valley Road, ran the red light and t-boned the Mitsubishi. The 40-year-old driver, identified as Heather Hackett, the sole occupant in the Mitsubishi sustained fatal injuries and was pronounced dead at the scene.

Per scanner traffic, the suspect is described as a White or Hispanic male between 18-25 years old, about 5’8″, wearing a black hat and a black shirt with a goatee. According to witnesses, the male was seen running westbound through a field towards Miramot. Ground units, as well as a CHP helicopter, established a perimeter and are actively searching the area for the suspect.

According to authorities, Bear Valley Road/Geode Avenue to Joshua Road and Central/Sioux Road to Bear Valley will be shut down till about 4:30 P.M.

Anyone with information is urged the San Bernardino County Sheriff’s Department, Apple Valley Station at (760) 240-7428.