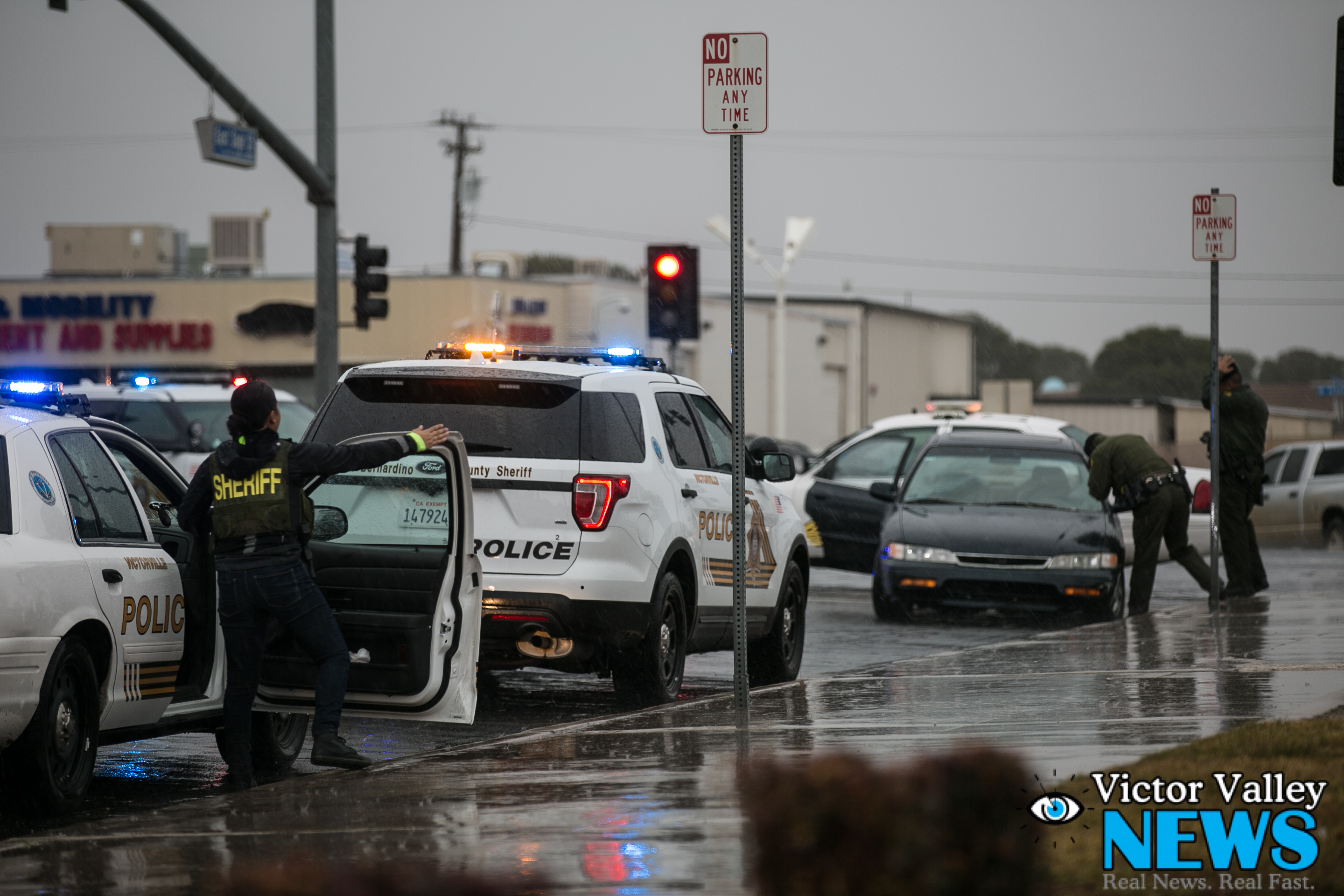 A San Bernardino County Deputy brings out an abandoned car seat that was ditched inside the Taqueria Los Hermanos on 7th Street in Victorville. (photo by Hugo C. Valdez, Victor Valley News)

VICTORVILLE-(VVNG.com): One suspect was detained and a second remains at large following a high-speed pursuit on the 15 freeway that terminated in the city of Victorville. A deputy attempted to perform a traffic stop on the I-15 northbound  just before 12:15 p.m. on Wednesday.

The suspect, according to San Bernardino County Sheriff’s officials entered the Walmart located at 11896 Amargosa Road with an unidentified 16-year-old male. The two suspects allegedly stuffed BB guns and make-up in a diaper bag  then attempted to leave the store without paying for the concealed merchandise. When approached by the loss prevention associate, the 16-year-old pulled a knife from his front pocket to threaten the loss prevention associate.

The suspect, fled in the black Honda Accord heading northbound on Amargosa Road.  Deputies located the suspect vehicle on the 15 freeway northbound at Bear Valley Road and attempted to stop the vehicle. The driver failed to yield causing a brief pursuit driving in excess of 85 miles per hour at some points.

The Honda Accord continued moving around traffic on the right shoulder of the freeway. Per scanner traffic, the suspect exited on Palmdale Road and continued westbound onto 7th Street. The vehicle eventually came to a stop at the intersection of 7th Street and East Sage Street and the two male suspects fled on foot. The 16-year-old male was caught during the foot pursuit and Garcia exited the vehicle, removing his child, a 1-year-old girl from the back seat of the vehicle fleeing in the opposite direction. The suspect ran inside the “Taqueria Los Hermanos” on the 14200 block of 7th Street and dumped the infant car seat and continued running with the baby.

The outstanding suspect was described as a Hispanic man, with gray shorts, a gray hoodie, and a dark-colored beanie. According to scanner traffic, the suspect was seen getting into a white older model vehicle near St. Andrews Drive. Deputies received information that the vehicle was headed to a Cottonwood Street address. Deputies responded to residence and were unable to locate the suspect or the infant.

According to scanner traffic, deputies made contact with the girlfriend of the suspect who as of 1:05 p.m. did not know where her baby was.

A witness provided deputies with a new lead and stated the suspect was seen in the area of D Street in Victorville heading toward the riverbed. Deputies used numerous ground units, the CHP helicopter as well as K-9 units to assist in the search for the suspect.

The suspect has dropped the child off with family at about 6:00 p.m. and continued to flee on foot. Anyone with information regarding the whereabouts of Jose Garcia is urged to contact the Victorville Station, Detective M. Mason or Detective D. Maddox at (760)241-2911.

The suspects inside a black Honda Accord stopped the vehicle involved in the pursuit at the intersection of 7th Street and E. Sage Street in Victorville before foot bailing. (Photo by Hugo C. Valdez, Victor Valley News)