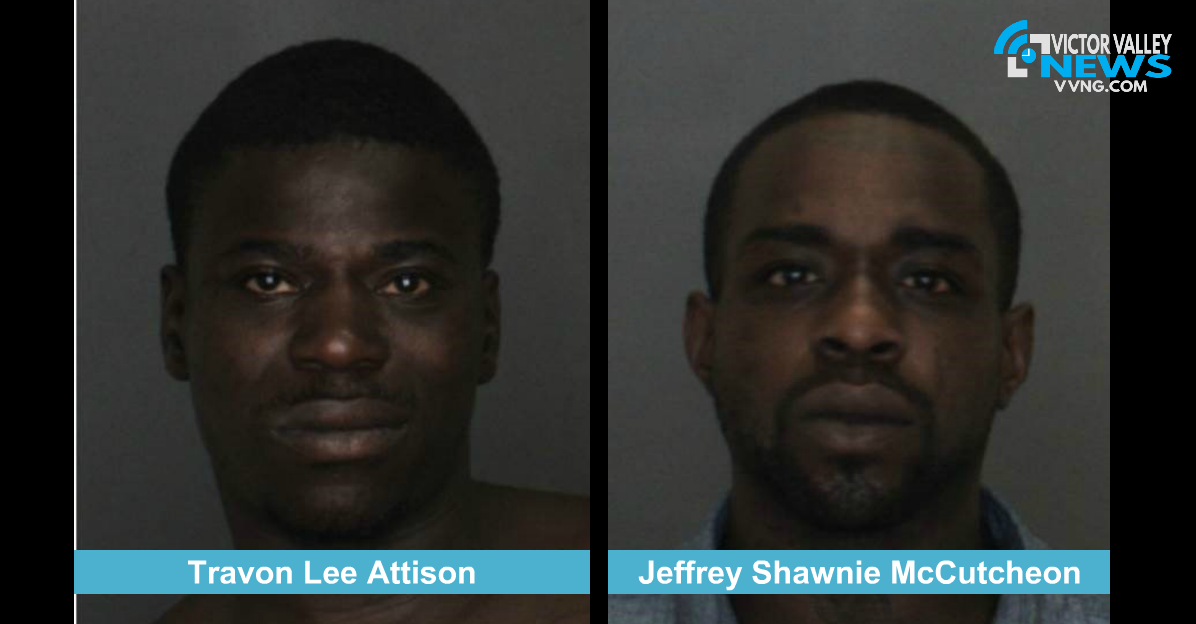 VICTORVILLE, Calif. (VVNG.com) The Barstow Police Department is urging the public to be on the look out for two suspects considered to be armed and dangerous.

Travon Lee Attison, 29, of Victorville and Jeffrey Shawnie McCutcheon, 25, of Apple Valley are accused of robbing a man at gunpoint and pistol whipping him outside a Coch Outlet store in Barstow.

On Friday, July 29th officers responded to the Tanger Mall located on the 2700 block of Tanger Way regarding an armed robbery.

“The victim reported that two male subjects pointed a firearm, possibly a shotgun, at him and struck him in the face with the firearm, as they demanded his personal property,” stated a news release. The victim reported that the two subjects robbed him of several thousand dollars in U.S. currency as well as numerous items of property that he had purchased from the Coach Outlet Store.”

A female suspect with the males alerted them as the outlet security guard was approaching.

As the suspects fled, the victim was able to obtain a vehicle description and a partial license plate of the suspect’s vehicle.

Approximately forty minutes after the robbery, CHP officers located the vehicle driving south on Interstate 15 midway between Barstow and Victorville. As CHP officers attempted to conduct a traffic stop on the vehicle, the driver of the vehicle failed to stop and led officers on a pursuit.

The vehicle exited the freeway at the Stoddard Wells off-ramp and entered a residential area. The vehicle was involved in a single vehicle traffic collision in the area of Dante Street and Juniper Avenue in the City of Victorville.

CHP Officers, with the assistance of SBCSD Deputies were able to take the sole occupant of the vehicle into custody without incident. Officers identified the driver as Isis Womble.

Detective Tom Lewis conducted an infield show-up at the scene and the victim positively identified the vehicle as the one the suspects fled in and Womble as the female suspect at the scene when he was robbed.

Detectives did not recover the firearm used during the robbery.

During the course of the investigation, Barstow Police Detectives identified the two male suspects in the robbery as Travon Attison and Jeffrey McCutcheon.

Transient arrested for attempting to steal a printer