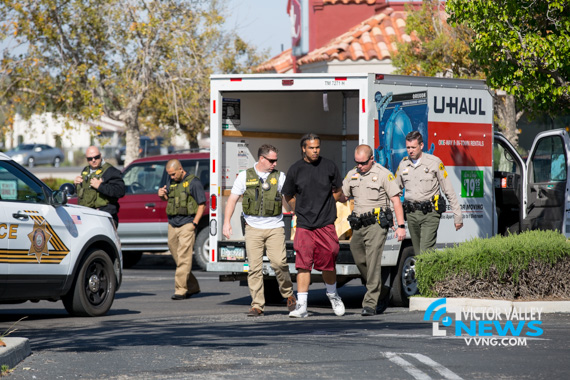 APPLE VALLEY, Calif. (VVNG.com) Three suspects were arrested for starting a fire in the Apple Valley Walmart that forced a weeklong closure of the store, and a fourth person was arrested for theft.

Upon arrival, deputies were advised that three suspects, (identified Monday as Victoria Gayosso, 29,  Jessi Cardenas, 31 and Artel Brown, 24, all residents of Victorville) were preparing to steal items when they started a fire to create a distraction. The trio then fled the scene.

On April 10, 2017, deputies were dispatched to the Apple Valley Target on Highway 18, across the street from the Walmart, when vigilant employees recognized two of three suspects that entered their store Monday morning.

At approximately 7:45 a.m., loss prevention officers from Target, in the Town of Apple Valley, observed the trio as they stole items from the store and acted suspiciously.

Deputies and Detectives from the Apple Valley Station responded to the scene and arrested Cardenas after he exited Target. The other two suspects inside the store were not aware of his arrest.

The second suspect, Earl Turner, 22 of Victorville, was witnessed walking in and out of the business to move his U-Haul truck from various parking spaces farther and farther from the store.

Turner and Brown finally left the Target shopping center in the U-Haul and were both apprehended at gunpoint during a traffic stop in the adjacent business center.

Through investigation, detectives were led to a Victorville motel where they found Victoria Gayosso.

All suspects were arrested and booked into the High Desert Detention Center.

Gayosso, Cardenas, and Brown were charged with arson of an inhabited structure.  Subsequently, Cardenas, Brown, and Turner were also booked for shoplifting.

Turner was released from custody Monday night, however, the other three remain in jail in lieu of a $250,000 bail with a scheduled court appearance Wednesday afternoon, court records show.