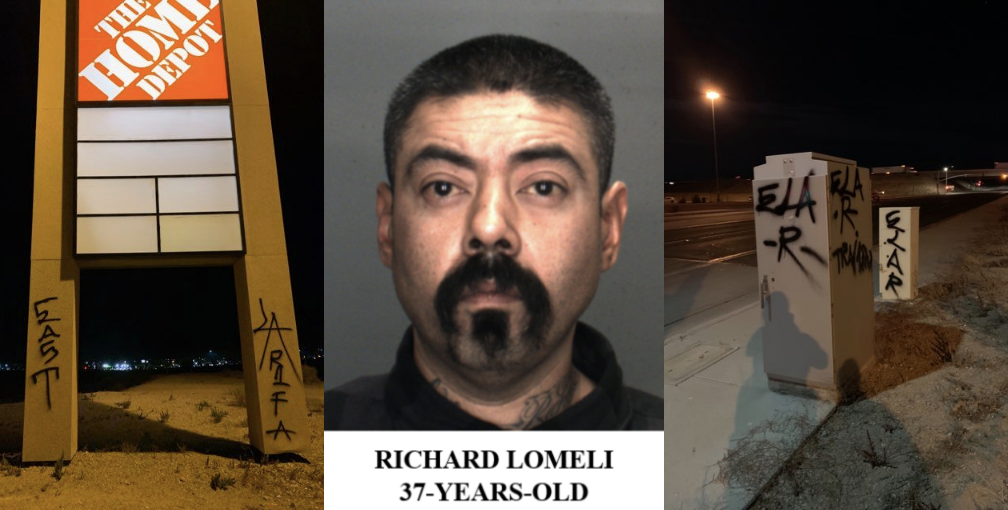 BARSTOW, Calif. (VVNG.com) — Richard Lomeli, 37, a resident of Barstow, was arrested for vandalism and assault with a deadly weapon, officials said.

On November 10, 2019, at approximately 6:48 P.M., the Barstow Police Dispatch center received a report of Vandalism, in-progress, in front of the Home Depot, located at the 1100 block of Avenue “L”.

According to a news release, the caller reported to Police Dispatch that the suspect also attempted to vandalize his vehicle in addition to the damage already caused.

Corporal M. Cardenas arrived at the incident location and observed the suspect, later identified as Richard Lomeli, chasing the reporting party armed with a large rock. The reporting party was maneuvering his vehicle to avoid damage.

Corporal M. Cardenas contacted suspect Lomeli and ordered him to drop the large rock, and was able to detain him. Once detained, suspect Lomeli was found to be in possession of a spray can, matching what was used to vandalize the surrounding area.

Lomeli then picked up a large rock, began approaching the reporting party and yelled to him, “I’m from East LA, come over here I have something for you”. The reporting party was in fear for his life based on the erratic actions of Lomeli and began maneuvering himself away from Lomeli.

Lomeli was booked into the San Bernardino County jail – Barstow.

Anyone with information regarding this investigation is asked to contact Corporal M. Cardenas or the Barstow Police Department at (760) 256-2211. Those wishing to remain anonymous may also make a report by calling the WE-Tip hotline at 1-800-78-CRIME.