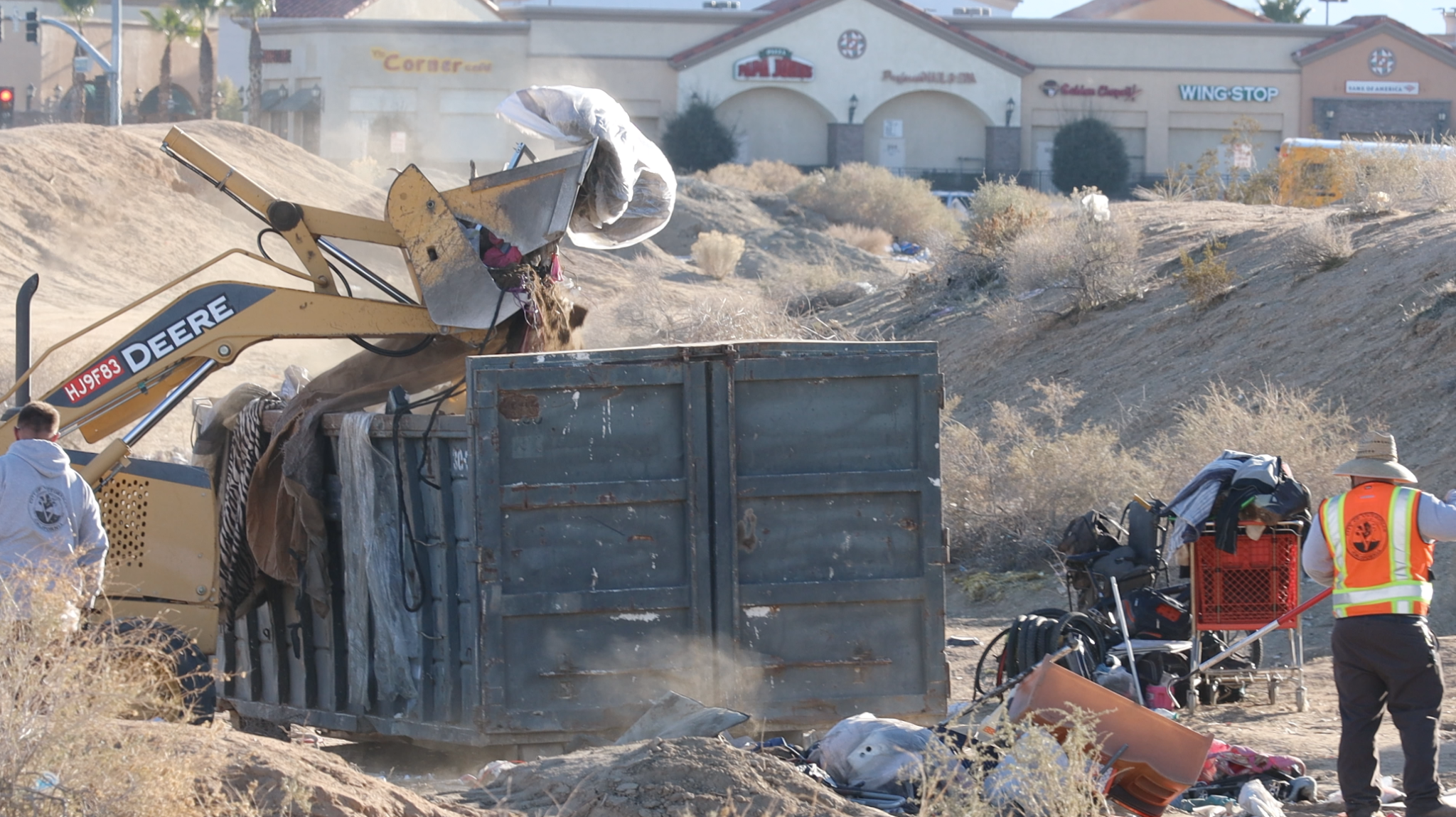 VICTORVILLE, Calif. (VVNG.com) — A plan to create a 150-bed enhanced homeless shelter, referred to as a Wellness and Recuperative Care Center, was discussed during a presentation at a Victorville City Council meeting on March 3, 2020.

The first component of the facility is a 100-bed shelter that will provide support services to homeless men, women, and families; while the second component is a recuperative care center with 50 medical respite beds.

There are currently two city-owned properties being looked at as home of the new facility; either vacant-land near Eva Dell Park or vacant-land near the intersection of A Street and 8th Street, the presentation showed.

“The reason the City is looking at City-owned land is because of the grant process. The fact that the City will be able to have site control would give us an extra benefit with moving forward with the grant,” stated Cassandra Searcy, who was recently hired by the City as the Homeless Solutions Coordinator.

One of the two proposed locations.

According to Searcy, City staff has already examined a modular-constructed building, one built offsite which is then delivered.

“City staff has examined a building and connected with a local modular company and toured the plant,” she stated.

The building being reviewed is a 17,000-square-foot modular-constructed building that was previously used as a detention center in San Ysidro and previously owned by the State of California.

It’s three-years-old and was occupied for only two years, according to Searcy. It will be delivered to the location chosen by City Staff.

“This building is State-approved, and once in place we will initiate a request for proposal for lead operators to manage the wellness and recuperative care center. The buildings will be leased to operators, and the city will continue to form strategic partnerships,” Searcy said.

The partnerships are an effort to reduce homelessness in the area, an increasing problem the City has been facing, which has caused an increased strain in manpower and resources.

The city of Victorville ranked second in terms of having the highest population of homeless persons in the County for two years in a row, second only to the City of San Bernardino, according to an annual Point-in-Time count of homeless individuals last conducted January 24, 2019.

The count gathers information and provides a snapshot of homeless individuals and families throughout the county both sheltered and unsheltered.

Sheltered in Victorville were 133 and unsheltered was 179 plus 21 in transitional housing, bringing the total to 333, the report stated.

“People primarily without housing are high consumers of public resources, and in such, they tend to generate an expense to the City rather than income,” Searcy explained.

“Just to illustrate, in 2019, City Staff exhausted 339 hours in homeless related cleanup efforts, which included the disposal of 155 tons of trash and solid waste, Searcy said.

There were 315 homeless encampment cases that were created, and in regards to mobilizing a response to the encampments it requires the coordination of code enforcement, law enforcement, and community services,” stated Searcy.

The new facility will not only provide unique amenities designed in a way to assist the homeless, but in such, “this will reduce the foot traffic and visibility of homeless persons in the communities, and business districts,” the strategy said.

Some of the amenities in the wellness center are not typical in any other shelters, it will have separate sleeping areas for the men women and families so people can stay together. The basic needs will be met, which includes the meals, and the ability to shower, and the ability to have a mailbox to receive important documentation.

People will be assigned a case manager so they can have strategic case plans to help with documentation readiness, income stabilization, and housing navigation. There will be a variety of support services on-site to include workforce training, job readiness skills, life skills, and recovery skills.

Also available will be space for pet kennels, so if a homeless person had an animal or a pet, they can bring it to the wellness center. There will be space for storage lockers and big bins so people can safely secure their items. Similar to a day center so that individuals can rest, they can recover, and they can work on their individualized case plan, rather than being forced out into the community.

At the conclusion of the presentation, Councilwoman Debra Jones had a few questions. The first was “are there any barriers to entry to the wellness and recuperative center?”

“It’s low-barrier, but there will be a couple of barriers, for instance, because we’re having children and families, we will not be able to allow sex offenders,  we will not be able to allow people who have a history of violent crimes or open or active warrants. But For the most part, it will be a low barrier, checking off a lot of boxes so people can enter,” Searcy answered.

The second question Jones asked was, “And to what degree, if any, are local non-profits coordinating efforts for this center?”

“Right now there will be a combination of non-profits and local governments and in terms of the coordination, it will pretty much be through MOU’s (Memorandum’s of Understanding.) The agencies are willing to provide services free of cost to the city with the ability to occupy the space and meet the need,” Searcy responded.

City Manager Keith Metzler answered a question that council member Jim Cox had regarding the Queens Motel’s conversion to a shelter.

“This is totally separate what we presented to you tonight, and totally independent, the Queens Motel, which is being re-coined Desert Haven, not sure the latest update, the last update I had was they’re expected to be completed in April. But that’s geared more towards the segment of the homeless population that are considered chronically homeless,” Metzler said.

Councilwoman Blanca Gomez requested a workshop for further questions she had.

This project appears to be one step closer to the help that Caitlin Patrick, a 27-year-old homeless living in Victorville, discussed during an interview with Victor Valley News on January 23rd, 2020.

That day, members of the Victorville City cleanup crew were in the area to clean up trash and debris that was scattered along the City wash that extends from Civic Drive into the field, where Patrick lived amongst other homeless people in an encampment.

Patrick said she was only given hours to move her belongings, and that she lost several items along the way because of the short notice she and others were given.

“Having to relocate without any help, and with given such short notice, it sucks. I’m extremely exhausted and I’ve had a long day moving a lot of stuff, and I’ve even lost a lot of stuff that was valuable because I just couldn’t take all of it,” Patrick stated back in January. “It’s not fair to us when there is a lot of money that is supposed to be spent on us, and none of it… we’re not seeing any of it, It’s getting rough. We’re still human, we still eat, we still drink we still bleed. We’re all the same. The only thing that’s different is our living situation.”

Persons who wish to address the Homelessness Solutions Taskforce in an agenda item or other items of interest with the subject matter may attend and speak by completing a white speaker’s card at the entrance.