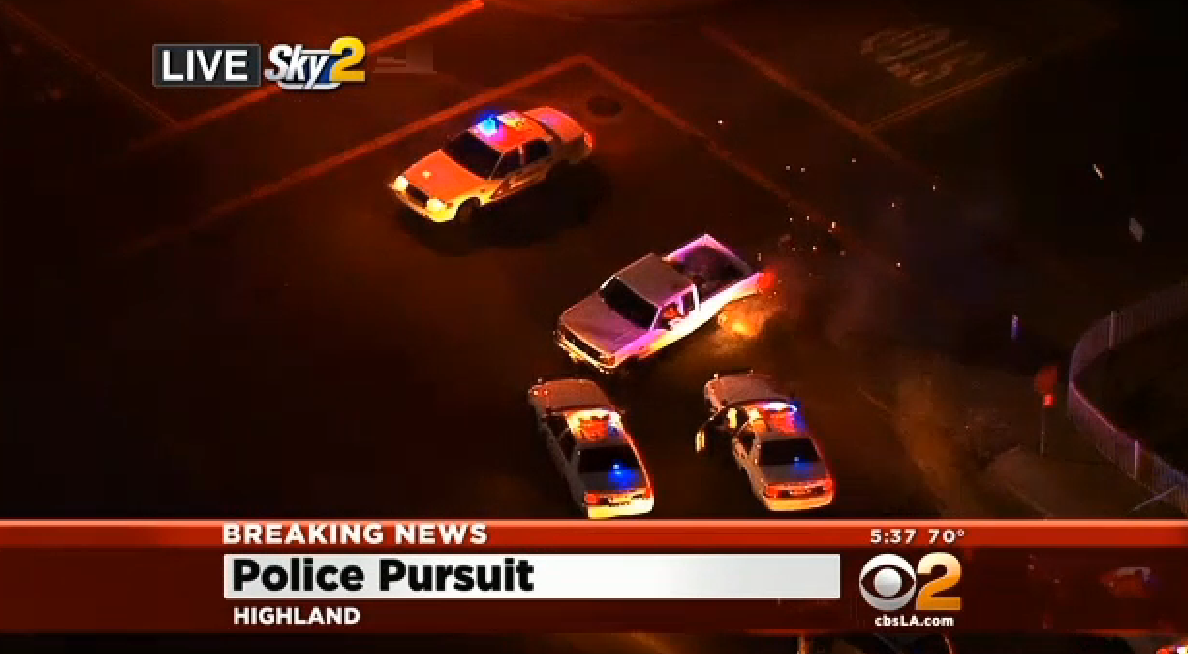 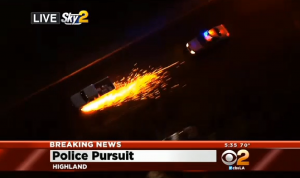 Deputies from the Victor Valley Station respond to the 1400 block of Goss Rd., in Pinon Hills on Tuesday, January 21, 2014 at 4:28 p.m., following a report of a violation of a restraining order.

When the first deputy arrived he attempted to make contact with Brian Curran, 50, Resident of Pinon Hills, who immediately drove his truck directly at the deputy. The deputy feared for his safety and fired at the suspect.

The suspect rammed his vehicle into the unoccupied patrol car and fled from the scene.

The California Highway Patrol located Curran fleeing the scene and initiated a traffic stop. Curran failed to yield and was pursued south on the I-15 into the city of San Bernardino. Deputies from the Central Station took over the pursuit in San Bernardino.

The suspect, driving in a white pick-up truck, led police on a chase reaching over 100mph on the southbound 215 before the vehicle was hit by a spike strip, knocking out tires on its left side. Sparks could be seen flying from the vehicle as the driver attempted to speed away from police.

After about 20 minutes, the pursuit was terminated with the PIT, at the intersection of 48th and E Street in Highland just before 5:30 p.m.

When Curran was taken into custody, deputies discovered he had a single gunshot wound and medical aid transported him to a local hospital.

Sheriff’s Homicide Investigators responded and conducted an investigation into the deputy involved shooting.

Anyone with information regarding this investigation is urged to contact Detective Joe Janowicz or Sergeant Chris Fisher at (909) 387-3589. Callers wishing to remain anonymous are urged to call the We-tip Hotline at 1-800-78-CRIME (27463) or you may leave information on the We-Tip Hotline at www.wetip.com.