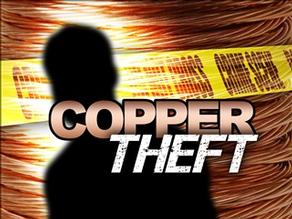 On Thursday, August 28, 2014 Deputy Mike Reardon responded to the location and determined the suspect cut the lock to the property located in the 4100 block of Warbler Road in Phelan. The suspect then pulled approximately 500 feet of heavy gauge copper wire from the ground with their vehicle. The suspect dragged the wire about a mile down the road where it appears they put the copper wire into their vehicle. Foot prints, tire tracks and other evidence was located at the scene, according to authorities.

During a subsequent investigation by Deputy Robert Oakleaf of the San Bernardino County Sheriff’s Departments Rural Crime Task Force, information was obtained leading him to a residence in the 12000 block of Ponderosa in Pinon Hills.

On September 3, 2014, Deputy Oakleaf, with the assistance of Detectives from the Victor Valley Sheriff’s Station and Detectives from the San Bernardino County Auto Theft Task Force (SANCATT), made contact at the residence on Ponderosa. During a search of the residence, two stolen vehicles were located on the property. It was learned through the investigation the wire had been scrapped. The wire was recovered and returned to the victim.

Kyle Peairs was arrested for stolen property and booked at the Victor Valley Jail. He is currently being held in lieu of $25,000.00 bail.

Anyone with information regarding this investigation is urged to contact Deputy Robert Oakleaf (760) 552-6800. Callers wishing to remain anonymous are urged to call the We-tip Hotline at 1-800-78-CRIME (27463) or you may leave information on the We-Tip Hotline at www.wetip.com.