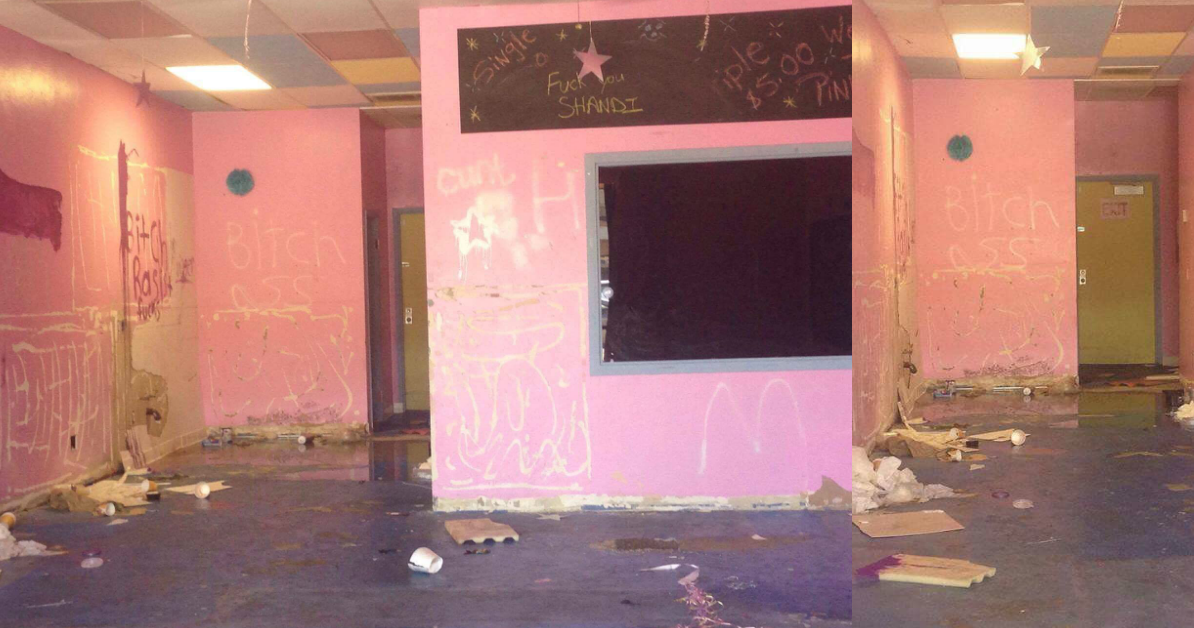 In the photographs, you can see the painted pink interior walls covered with offensive graffiti displaying inappropriate words and images. There is also a significant amount of water inside the space that appears to have caused flooding.

In mid-September a “Notice to Vacate” addressed to Linda Gonzalez from A. M. H. Prestige, Inc. was posted on the front glass door of Pinky’s Ice Cream. The note signed by a sheriff’s authorized agent stated: “Final notice is hereby given that possession of the above described property must be delivered to the plaintiff on or before 9/28/2017 @ 6:01 A.M.”

Victor Valley Sheriff’s Station Trish Hill said they had not received any reports or calls of vandalism at the location.

Spring Valley Lake Association General Manager Alfred Logan said he was alerted to the incident by photos he received from a resident.  The association hasn’t taken any reports for vandalism, and public safety had not been requested to respond.

Logan said the property owner was made aware and it would be up to them on how to proceed.

This comes after a whirlwind of controversy that surrounded the business during the five short months in operation including over a dozen police calls to the location.

Almost immediately after Pinky’s grand-opening, different incidents started to circulate alleging racial harassment from the Spring Valley Lake community as well as several alleged threats of harm or violence against Linda and her employees.

According to sheriff’s officials, no arrests were ever made in any of the many said incidents.

However, residents have rebutted those accusations and feel they have been wrongly labeled and accused. Many of those residents have expressed their anger and frustration on social media and have even filed police reports against Linda for threats and harassment.

As of now, officials said no investigation has been launched.

The story is developing, and information will be updated as it becomes available.