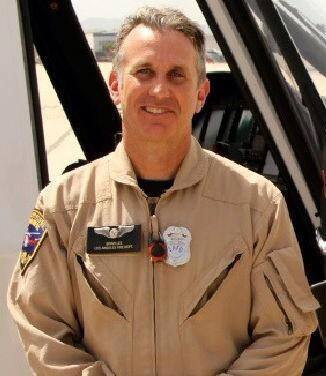 The incident was reported on Monday at 11:10 a.m., according to the Federal Aviation Administration and the Fire Department. Brian Lee, a 47-year-old, off-duty LAFD Helicopter Pilot/Firefighter Paramedic had been piloting the plane with his 7-8-year old male passenger. The accident was initially reported as a helicopter accident but, upon arrival the firefighters discovered it was a small plane that had crashed.

The pilot, passenger and the witness’ were all said to all be part of one camping group at El Mirage Dry Lake Bed. The small plane was said to have taken a nosedive for unknown reasons while the pilot tried to regain control by unsuccessfully trying to land it. Upon impact the plane flipped several times subsequently stopping approximately 30 yards away. Off duty Los Angeles County Fire Fighters witnessed the accident and rushed to the aid of the crash victims. The aircraft the two were in was described as a Grumman AA-1A single engine, 2 seater that was occupied by two occupants. Eyewitnesses reported the small aircraft is completely destroyed.

Both occupants were administered CPR and other medical aid immediately following the crash. Both patients were airlifted to a local trauma center, where unfortunately Brian, a 25 year LAFD veteran, succumbed to his injuries. The passenger remains in critical condition.