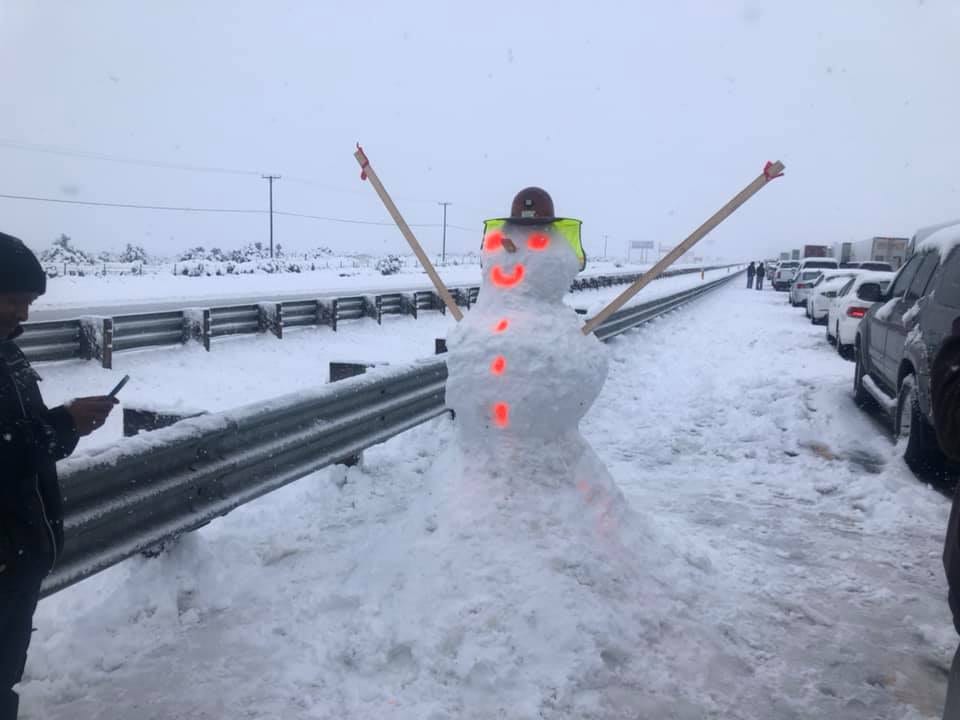 CAJON PASS, Calif. (VVNG.com) — It’s been a really rough morning for some motorists who decided to take their chances and traveled on the I-15 freeway through the Cajon Pass.

Many of those motorists have been stuck on the 15 freeway for several hours, leaving them stranded and in some cases running out of gas. With a sea of parked vehicles stuck in the snow, some people decided to make the best of the situation.

VVNG member Alex Kim decided to make a snowman as he patiently waited for CHP to reopen the freeway.

Many of the tractor-trailers were forced to pull the shoulder and park their rigs.

Some motorists thought they could get around the traffic by taking Mariposa Road to the Oak Hills on-ramp. Joe Anderson shared a photo of what that turned out like.

As of 9:20 am, the Cajon Pass remains closed in both directions. The southbound 15 is closed at Ranchero Road in Hesperia and northbound traffic is being diverted off at the 215 freeway.

MOTORISTS ARE ADVISED NOT TO TRAVEL DURING THE STORM EVENT.

Have a full tank of gas before you travel anywhere.

R-2 CHAIN CONDITIONS IN THE SAN BERNARDINO AND RIVERSIDE (IDYLLWILD) MOUNTAIN AREAS DOWN TO THE 3,500 FOOT LEVEL.

According to Caltrans District 8 update, the southbound I-15 has reopened without CHP escorts and the northbound remains closed as of now.