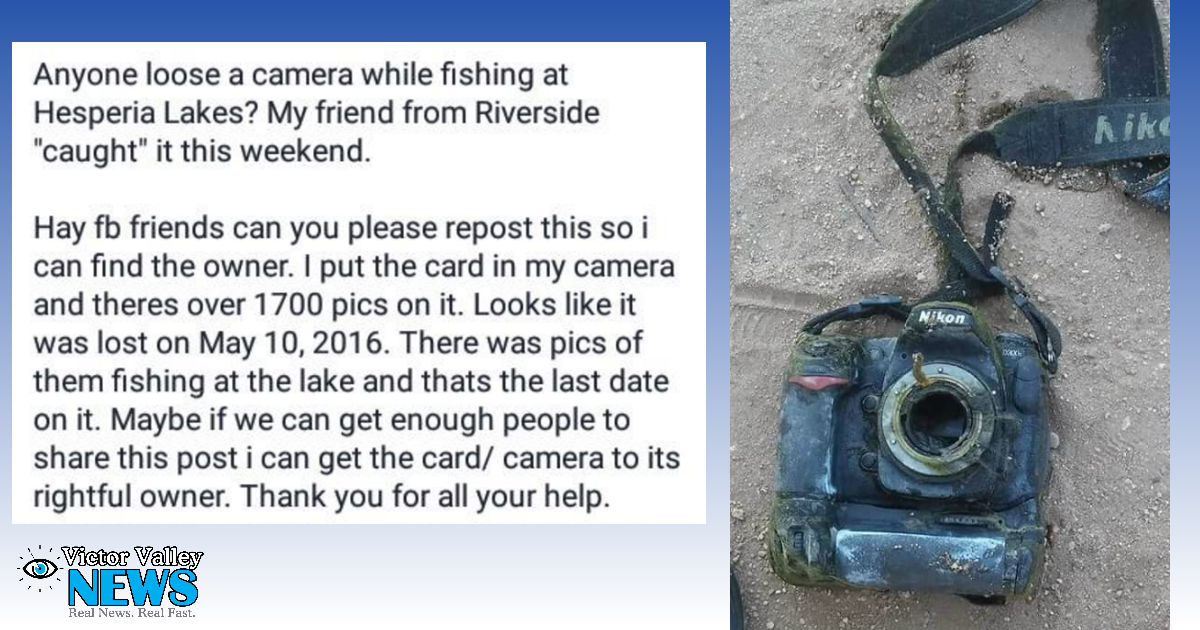 HESPERIA:(VVNG.com)- A Riverside woman, Shelly Hirst was fishing at Hesperia Lakes on Wednesday morning when she hooked something she never expected.

“At first, I thought it was a large branch and I thought about cutting the line. My brother-in-law was like you caught the big one,” said Shelly.

“I kept reeling and when it started coming up from the water I still thought it was a dark branch.”

When Shelly realized she fished out a Nikon D3 camera she was in shock. “Who fishes out a camera?” she said.

Many thoughts immediately crossed Shelly’s mind. Like why would anyone just throw the camera in the lake with the memory card still inside? She even wondered if it could somehow be connected to a crime.

Shelly was determined to reunite the camera with its rightful owner. She turned to Facebook to help get the word out.

Shelly had no idea about the violent attack that had occurred on May 10th, 2016, at Hesperia Lakes involving VVDaily Press photographer David Pardo.

David Pardo was on assignment at Hesperia Lakes photographing for an upcoming guide to be featured in the local newspaper. Pardo snapped a photo of a woman feeding a duck, whom he then approached to ask for permission to use the image. The woman became very upset and demanded David delete the photo.

Pardo politely declined, and explained that his company’s policy prohibits him from deleting images and explained he would not use the photos. Two men who were with the woman approached Pardo and began to threaten and assault David.

During the violent attack, David’s camera equipment and cell phone were thrown into the lake. All three suspects fled the scene before deputies arrived.

Immediately after the attack, several rewards were offered to help locate the people responsible for the crime.

On Monday, May 16, 2016, less than a week after the attack, Erika Ochoa was taken into custody following a traffic stop of her vehicle on Main Street near Walnut Street. The following afternoon just after 1:30 p.m. Mancillas of Hesperia turned himself in at the Hesperia Sheriff’s Station.

“Ever since the incident happened I’ve had many ideas about going and fishing it out myself,” said David Pardo. “The hurt, the anger, everything for me that was kind of another key part for this whole thing that happened. Now one of those key parts has presented itself.”

A very emotional Pardo met Shelly at her Riverside home on Thursday afternoon. Almost 2 months since the senseless beating Pardo now has the camera and some closure.

Man Tasered After Assaulting Deputy and Trying to Steal Vehicle