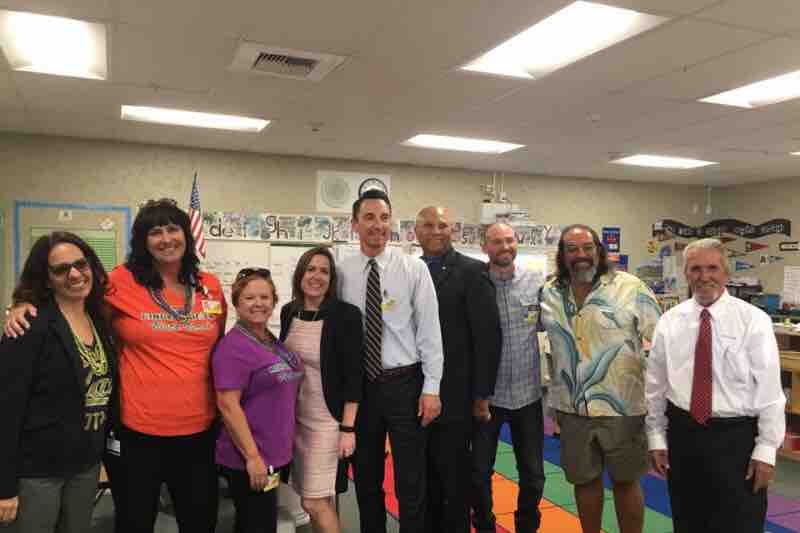 PHELAN, Calif. (VVNG.com)- On December 31st, driving home from a gathering, a tragic accident occurred due to slick roads and bad visibility. Edmond Joseph Pare, Jr. a beloved husband, father and community advocate, crashed his Dodge Durango into a pole in Phelan, at Wilson Ranch & Phelan Road. He was unresponsive at the scene, and died later at Desert Valley Hospital.

“Ed” Pare, Jr. was a man of amazing spirit and compassion. A smile wherever he went, outstretched arms and huge heart. “Just Christmas Eve, Ed and I hugged when we saw each other at Rite Aid. That’s what he and I did every time we saw each other. He had such a vibrant and caring personality.” Said Pastor Traore from Fountain Church. He was loved by many.

Ed’s vibrant personality was rivaled only by his own commitment to the community, paying particular attention to the school district, and the needs of those who utilize it. “Ed spent much of his life in public service in some form or another.” Cited Ron Griffin, Executive Director for the San Bernardino Head Start Program. “Ed was so passionate about giving underprivileged children the chance to succeed that he helped form a committee that donated books to these children, even driving books to donation sites in his own car. Partially as a result of these efforts, this year the county will offer a literacy program called Footsteps to Brilliance to all the children in our county.” Mr. Griffin further stated.

The garden club at Phelan Elementary recalled a memory of him taking on the project of dismantling and repainting the inside of the greenhouse in scorching summer heat, just because it had to get done.

Ryan Holman, Superintendent of Snowline School District, sent out a heartfelt email to the members of the Community Cabinet regarding his passing, and emails poured back in expressing sentiment of great loss.

Josh and Andrew have stepped up to try and help fill the shoes their father left behind in the community.  Continuing his legacy.

“Its really hard on all of us…keeping everyone together through this hard time…it’s so much to take on but we are doing it. I’m so thankful that we have the support and can come together as a family” says Victoria DeSilva, girlfriend to Joshua Pare, in a facebook post.

Natalie and the youngest daughter Hollie, were in the accident as well, Natalie has a broken arm and collapsed chest, Holly has a fractured pelvis and back.

A gofundme has been established to help the family with medical, recuperation and funeral costs. https://www.gofundme.com/ed-pare-memorial-fund

Also a meal train through www.takethemameal.com under Pare Family with a password of 9448.

Memorial service and funeral are still being planned. The family is not commenting on the details at the moment.