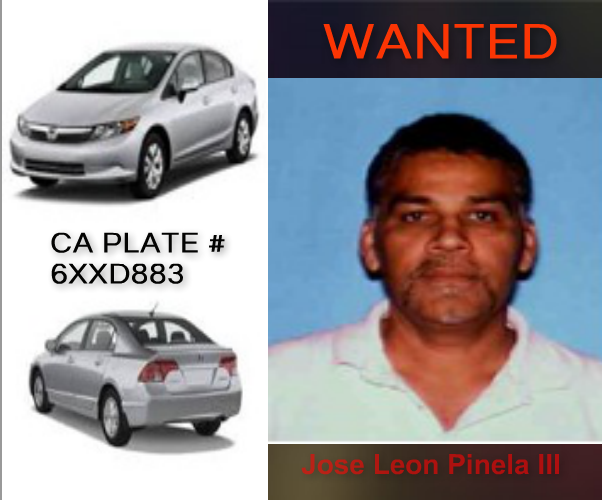 APPLE VALLEY: (VVNG.com)- Police are asking for the publics help in locating a suspect wanted for attempted murder. According to a press release, on Monday, October 13th, 2014 at approximately 7:58 p.m., deputies from the Apple Valley Police Station responded to a business in the 21500 block of Bear Valley Road reference an attempted murder.

The suspect identified as 53-year-old Jose Pinella III, a resident of Phelan had been involved in a prior dating relationship with the female victim and had found out she was now dating someone new.

[googlemap src=”” align=”alignright” ]The suspect Jose Pinella showed up at the victims work and used the butt of the shotgun to break out the glass door which was locked. He entered the business and fired approximately 4 to 5 rounds at the female victim and her male friend. The male victim was struck once in the shoulder. The female and another male who was also in the locked business at the time of the shooting were unharmed.

The suspect fled the location and dumped the shotgun under a vehicle in the parking lot of the business. The suspect left in a 2012 Silver Honda Civic California license plate 6XXD883. The suspect is believed to be armed. The male victim was flown to Arrowhead Regional Medical Center for treatment of a gunshot wound.

Anyone with information regarding this case is asked to contact Detective Alex Naoum at the Apple Valley Police Station (760) 240-7400 or anonymous tips can be made to WE TIP at 1800-78-CRIME.

Single Vehicle Roll Over on D Street Off-Ramp in Victorville