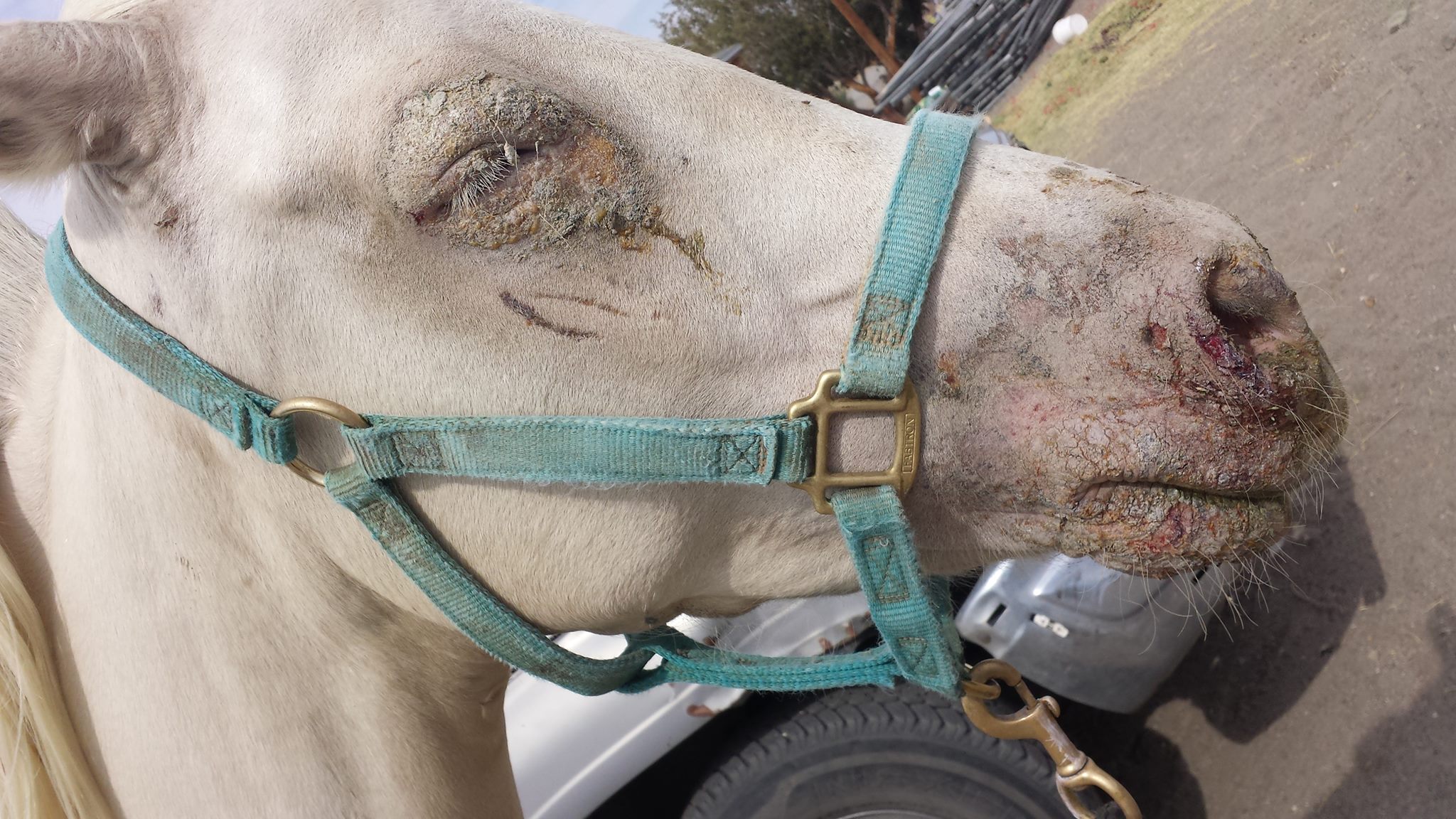 UPDATE: 7/30- Victor Valley News strives to not only provide real news real fast but also accurate and up to date news. The following is an update based on information we received. We can not confirm the validity of the source of the tainted hay by either party providing information at this time. We have received information from two sources that the Alfalfa Hay in question was not from one of the two Bishop growers and they have reason to believe the origin of the Hay affecting the horses came from a Barstow grower. The information provided by Diamond C Hay and Feed is believed to be that received by their distributor, which at this time will remain nameless. Victor Valley News is working on investigating the issue and the origin of the tainted hay.

Tim Hays, an Agricultural Consultant working in the High Desert region claims that Photosensitivity from Alfalfa can be naturally occurring. The reason why the effects may be so widespread at this time is there could have been a mishap or possibly negligence in the handling of the hay. The problems can stem from the hay being bailed too green, baled wet or other possible cross contamination. He assured the public that the hay that comes from the Bishop area is binded in black or grey twine. He also mentioned that the Alfalfa hay binded in yellow/gold-colored twine is from a grower he believes to be located in the Barstow or Newberry Springs area. “I believe I know exactly where it came from and it did not come from the Bishop area” said Hayes. Hayes believes that the false information may be coming from the distributor with the motive to mislead the public unknown.

Victor Valley News is working diligently to update the information that we provide to the public as received.

(VVNG.com)- Many local horse owners are in fear over the health of their now ailing horses. According to multiple owners,  horses have become ill due to the $17.99 Alfalfa they fed their once healthy horses.  The symptoms are described as sunburn type symptoms, most with cracking or flaking skin that with time gets increasingly worse. The burns, sores and pus on many of these horses is said to be consistent with chemical burns. Majority of the claims are from horse owners who reside in the town of Phelan. They allegedly purchased the tainted hay at Diamond C Hay and Feed in Phelan.

According to the FB page for “Diamond C Hay and Feed”, upon researching the origin of the hay, they have found it to be isolated from a hay broker in the city of Bishop.

Phelan horse owner, Kendall Melline purchased the hay on July 24th. Her award-winning, $120,000 mare is now, one of the many horses who have fallen ill due to eating this alfalfa hay. “She has severe chemical looking burns, she is swollen, has pus, lesions and is lethargic,” said Melline. According to Melline a horse in the Phelan area has already died after eating the tainted hay, and exhibiting symptoms similar to the others affected.

Stephanie Dorn, another horse owner, also purchased her hay on July 24th. Her horse is being treated by cleaning the affected area with burn cream and keeping her out of the sun. “I talked to the owner and they said its some sort of leaf in the hay that is affecting horses in this manner,” said Stephanie Dorn. Horse owners and boarders are sharing their experiences hoping to gain insight regarding the cause, treatment and prognosis from their now ill horses.

“My hay was purchased at the hay yard off of Johnson. I can’t get a vet out they are all busy, I don’t know what to do. I’m going to be sending in samples of the hay to the department of agriculture. In the meantime I’m doing my best to keep my horses from dropping,” added Melline, in fear for her rare, prize-winning horse’s well-being.

The horse owners have shared that sunblock and fly masks with nose guards help maintain or even in some cases improve the condition. Some were told to rinse the horses with water a few times a day and others were prescribed Dexamethsone (Azium). Dexamethsone (Azium) is mainly used for the treatment of acute and chronic inflammatory conditions of the joints.

This condition seems at this point to be widespread, not only affecting hay purchased at Diamond C Feed Store, but also reaching Riverside and Ventura Counties. A Diamond C Feed Store representative told members of a Phelan Ca Facebook group that they were not made aware of the issue until six customers called on Friday July 25th. At that point they began conducting an investigation leading to their findings of the load being a single load that came from Bishop. According to the Diamond C Hay Feed store representative, they contacted the grower who assured them no chemical sprays were used in the growing of their alfalfa.

Horse owners are encouraged to return any unused hay to Diamond C Feed store for an exchange for unaffected hay. Blood work is also encouraged to check for possibility of  liver damage of horses who have consumed the Alfalfa in question. Most showing outward signs are lighter colored horses at this time, darker colored horses can also be suffering ill effects that can only be identified through blood work.

Customers of Diamond C Feed Store for the most part are very pleased with the concern and quick response of the store employees. Most have known them for years because of their exemplary care and customer service. At this time we were unable to get a statement from a representative at Diamond C Feed Store because they are working on answering customer questions and resolving this issue.

On July 27th Diamond C Feed Store put out this statement via their Facebook page:

We appreciate the understanding and patience from our customers. We are diligently working on the situation and will give an update as soon as we have one. The case is isolated to one load of alfalfa just at the Phelan location. If you have issues with sunburn in your horse or other animals, please notify us and refrain from taking other actions. We are concerned for all animals and customers involved and want to get to the bottom of this as well. First and foremost, for the animals well being. Second, for our customers satisfaction. Third, for the health of our business. We work hard to provide quality, diversity, and good customer service. We’re not perfect, but our efforts are real. We look to serve you and serve you well. If you have questions or concerns, please feel free to contact me at 760-646-0913, or my father at 760-559-0112. Again, thank you. It’s because of you we’re in business and for you that we’re in business. 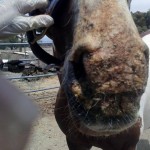 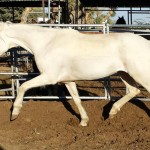 Before Photo Provided by: Kendall Melline 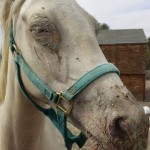