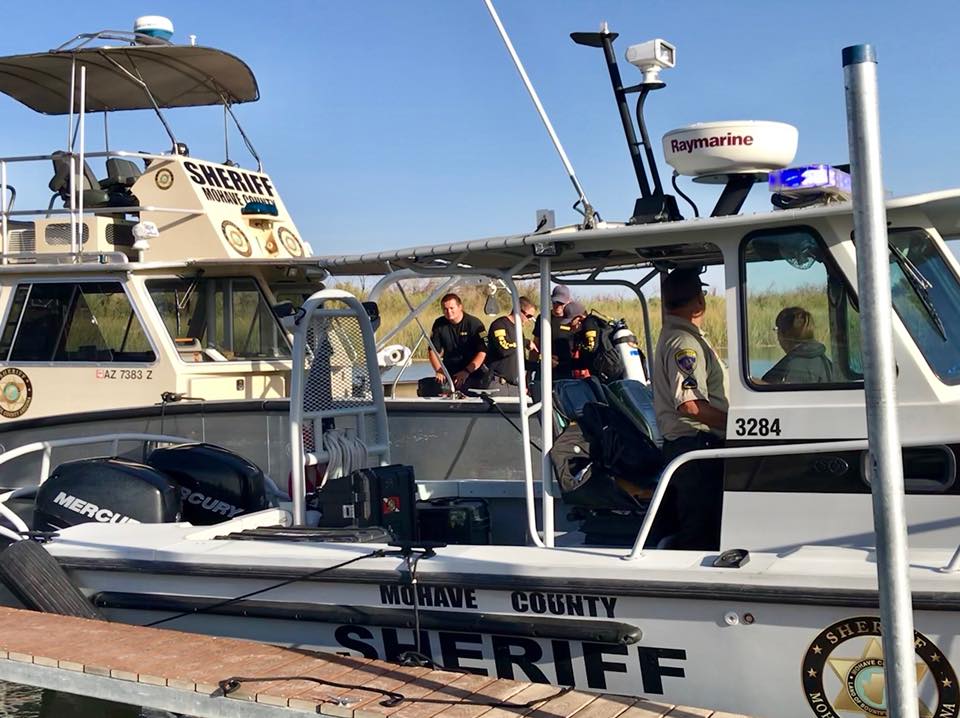 UPDATE 9/2/18 @ 10:00 — At approximately 8:03 PM the Mohave County Sheriff’s Office Communications Center received several 911 calls in reference to a boating crash on the Colorado River between Pirates Cove and the Topock Marina, north of Lake Havasu. Several callers advised that multiple people were in the water, there were multiple injuries, and several people were missing.

Units from the Mohave County Sheriffs Office Division of Boating Safety responded by water and land to the area. Upon their arrival it was determined that a Hallet boat occupied by 10 people, was northbound, and a Sleek Craft boat, occupied by 6 people, was southbound on the Colorado River between Pirates Cove and Topock Marina when they collided head on.

During the collision, all subjects from
both boats were ejected into the water, and both boats sank.

Several people were pulled from the water by passing boaters.

Deputies and an onboard AMR paramedic located a critically injured female that was in a good Samaritan’s boat. They were able to stabilize her, and transport her to shore. She was then flown from the scene to a hospital in Las Vegas in Critical condition.

Nine other people were transported to area hospitals by ambulance.

At this time, four occupants from the Hallet boat are still missing. Helicopters from Care Flight, Arizona DPS Air Rescue, and the San Bernardino County Sheriff’s Department were deployed in the area shortly after the initial call, and were unable to locate any of the missing subjects.

The Mohave County Sheriff’s Office with the assistance of the San Bernardino County Sheriff’s Department are conducting dive and search operations in the area of the crash. Please use caution in the area of the Topock Marina as dive and search operations are in progress. The river in this area maybe closed intermittently while searches are conducted.

NEEDLES, Calif. (VVNG.com) — Authorities are continuing to conduct an extensive search for 1-2 people who are missing following a boating accident on the Colorado River Saturday evening.

At about 8:03 pm, San Bernardino County Fire was requested to respond to a boating collision in the waters of the Colorado River in Park Moabi.

According to a tweet from SB County Fire, two vessels were involved in a head-on crash that caused one of the boats to sink.

As of 9:00 pm, multiple agencies are continuing to search for two missing occupants. One occupant was airlifted to UMC Las Vegas and four others were treated for non-life threatening injuries.

Before launching the boat for the weekend remember the big three that must be on board. Type 4 throwable life preserver, fire extinguisher, and a life jacket for everyone on board. All kids under 13 years must be wearing a life jacket. Safe boating is no accident! #safeboating pic.twitter.com/YoP0bixtJH

40 King is out supporting the Colorado River Station this weekend in an effort to keep boaters safe! Please be sure to designate a driver. pic.twitter.com/CRv6qamp0h