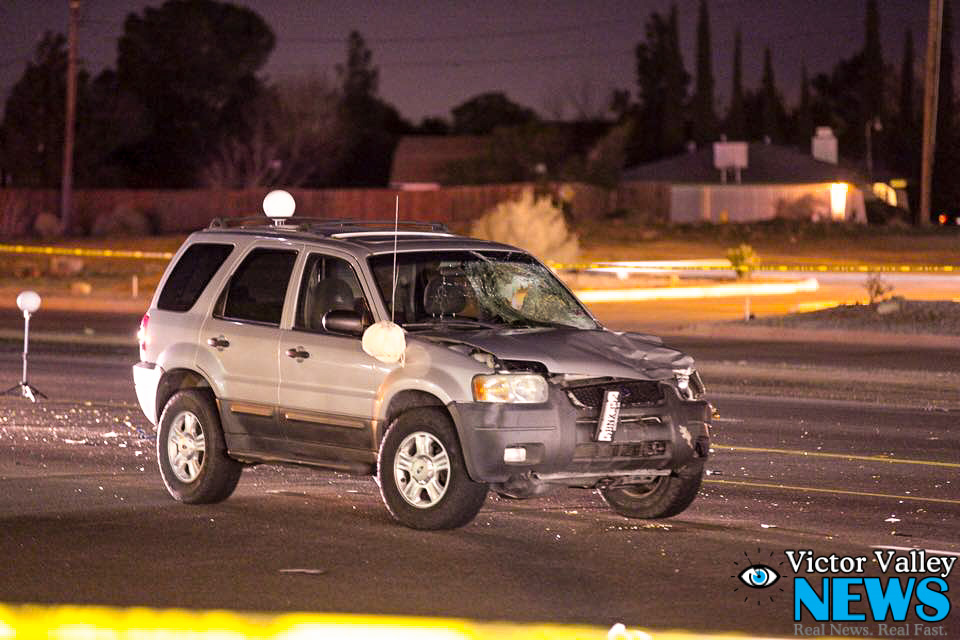 UPDATE @ 2/25 9:30 AM: Victor Valley News has just learned the male airlifted to a trauma hospital succumbed to his injuries. The male and female were a couple who lived in the general area of the accident. More information will be posted as it becomes available.

According to an officer at the scene, an unidentified male was transported by helicopter to an out of area trauma center with unknown injuries. A second person, described as a Caucasian female was pronounced dead at the scene.

The vehicle, a silver Ford Escape, that appeared to be heading eastbound showed major body damage to the hood and windshield area. Early reports estimate the SUV was traveling at about 45 MPH, and the female driver was not able to stop in time. The unidentified driver was taken to the station and tested for drugs or alcohol. At this time it’s unknown if either of those factors contributed to the fatal accident.

The Major Accident Investigation Team is on-scene and conducting the investigation. Officials from the San Bernardino Coroners Department have also been requested to assist in removing the body from the roadway. Authorities at the scene were unclear how long the roadway will remained closed for.

If you are traveling through the area please be advised of a hard road closure along the stretch of Bear Valley Road. Westbound lanes are closed at Kiowa Road. Vehicles can take a detour onto outer Bear Valley Road and get back on at Snapping Turtle Road. Eastbound traffic coming into Apple Valley is closed starting at Bear Valley Road and Mockingbird Avenue.

Boulder Creek Ranch; All Good Things Must Come to an End