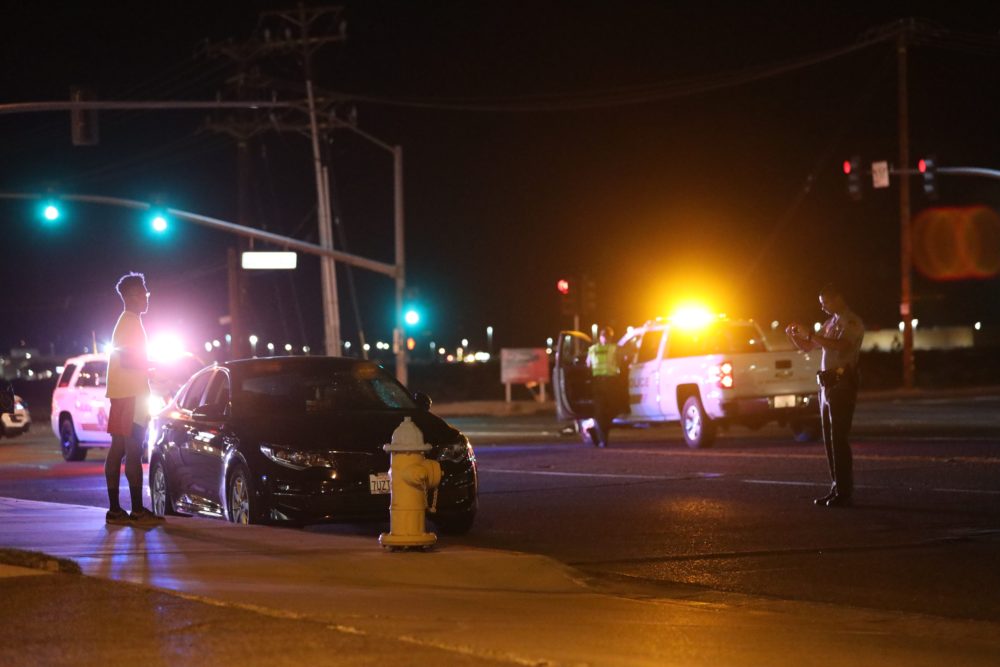 VICTORVILLE, Calif. (VVNG.com) — A stretch of Bear Valley a Road is closed after a pedestrian was struck by a vehicle here Monday.

The incident happened in the Westbound lanes of Bear Valley Road just west of Amethyst Road at 7:57 pm.

The Victorville Fire Department responded and found a 29-year-old male suffering from a head injury as a result of the crash.

The driver of the black KIA told VVNG they were driving to McDonald’s and didn’t see the pedestrian.

“It happened so fast, I didn’t even realize what happened, but I stopped right away,” the female driver stated.

A witness, Maria Marcellino, a resident of Hesperia, told Victor Valley News that the pedestrian had left the ARCO gas station on foot seconds before.

“My husband was pumping gas and I was in the car when I noticed a man walk out of the gas station and towards the crosswalk on Bear Valley and Amethyst,” the witness said.

“I heard a noise, looked up and saw the man flipping in the air. He was thrown into the turning lane on Bear Valley Road. He was in all dark clothing, I thought he was going to get hit again,” said Marcellino.

According to Marcellino, the driver of the black KIA had a green light.

“The man was not responsive at first. He was bleeding heavily from his head,” Marcellino told Victor Valley News.

A helicopter was requested to land at Liberty Park on Amethyst Road to fly the victim to a trauma center.