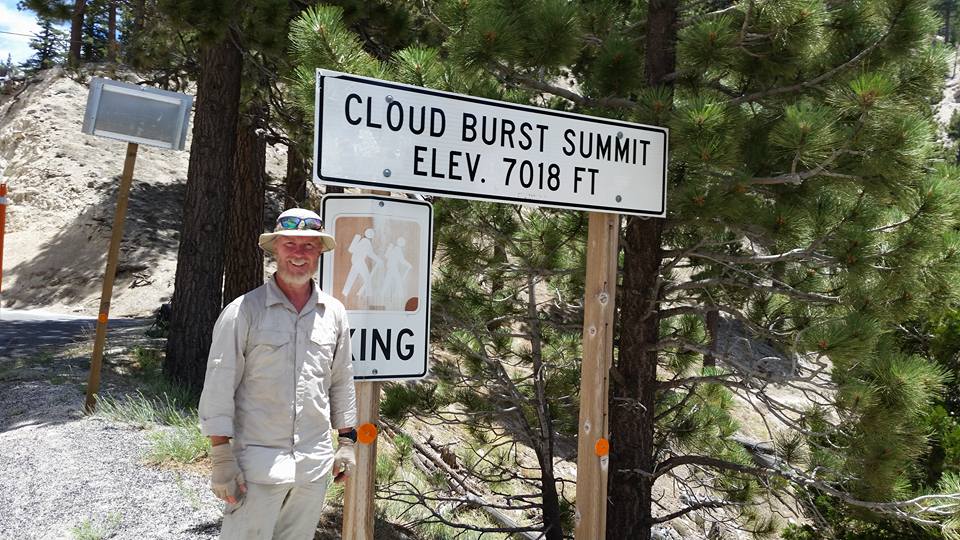 (VVNG.com)- Pacific Crest Trail hiker Dave Inglett finished the first leg this week of his four-year plan. He logged 566 miles, finishing in the Mojave Desert after leaving the US/Mexico border town of Campo about seven weeks ago.

Inglett, a former resident of Apple Valley now living in Harlingen, Texas, where he teaches fourth grade, plans to make the 2,650-mile trek from Mexico to Canada in two-month segments in the summertime between now and 2019.

When he neared the top of Cajon Pass, Inglett took a day off to visit with his friend, Don Hartzler, of Barstow. When Inglett lived in Apple Valley from 1988 to 1992, he was a flight instructor at a local airport.

The two men went for a spin over the High Desert before settling in for a visit and comfortable night — somewhere not alongside the trail.

Inglett’s typical day on the trail was to start out about 6 a.m. and hike for four hours, covering an average of 10 miles. Then for the next six hours, he would find a place in the shade and rest or nap before starting out again. He hiked another six hours in the cooler part of the day before settling down for the night.

It may have been a wide spot on the trail or under a large rock where he set up camp. He carried a change of clothes, hiking boots, water, food, utensils, and the most important item in his backpack — a poncho.

His pack weighed in at 40 pounds, a little heavier than the average weight of 30 pounds that most hikers carried on the trail.

Dave is decked out in his poncho, ready in case it rains. (Photos courtesy of Dave Inglett)

His poncho served multiple purposes: ground cover or blanket, to provide shade and, of course, came in handy in the event of rain.

The heaviest items in his backpack were food and water. He had prepared boxes of supplies ahead of time that his daughter mailed to him at various towns along the way.

His menu consisted of quite a few protein bars for meals and snacks. Any trash incurred while preparing meals had to be carried out with him.

Inglett was a solo hiker, altho he met many others along the way. They often hiked together for awhile but no one held the other back. Each one went at their own speed. Inglett’s goal was 15 miles a day.

He also met “Trail Angels” along the way, volunteers who open their hearts and homes to the hikers. They may offer the hikers a place to stay or a ride into the next town. This came in handy when hiking in steep terrain such as on the way up to Big Bear.

Altitudes varied from desert floors to mountain tops. Temperatures ranged from 45 degrees at Lake Moreno in San Diego County to 110 degrees in the Anza-Borrego Desert.

The most dangerous part of the hike was the possibility of disturbing the habitats of snakes. Inglett saw many snakes but always made enough noise in the areas where he thought they might be so the reptiles would get out of his way, instead of the other way around.

The greatest joy of his hiking experience was proving to himself that he could do it.

“This was just to prove to myself that if I could walk 600 miles in Southern California in June, then there are other things I can do for myself,” Inglett said. 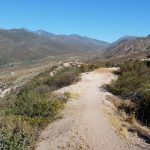 Off to the left is the San Andres Fault/rift. (Photos courtesy of Dave Inglett) 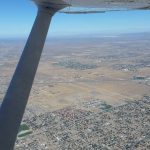 Flying over the High Desert on a day off from hiking. (Photos courtesy of Dave Inglett) 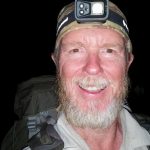 [box type=”note” align=”aligncenter” class=”” width=””]Ruth Lepper is a freelance journalist who divides her time between San Diego and the High Desert. Her award-winning articles have appeared in local, regional, national and international publications.[/box]